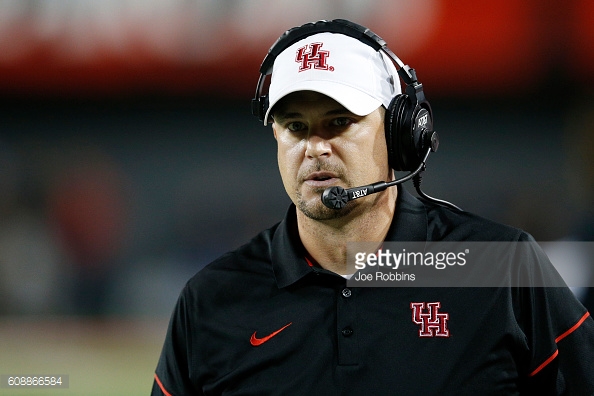 Where did the Tom Herman to LSU rumors come from? Look no further than the Texas boosters.

Thanksgiving night took an interesting twist when multiple reports began surfacing that LSU was closing in on Tom Herman to be the next head coach in Baton Rouge. Coincidentally, many of the initial reports were coming from folks with ties to the Texas Longhorns, such as Chip Brown and Geoff Ketchum. This immediately made me question the legitimacy or motive behind these reports.

Tom Herman is close to being named the next coach at #LSU, multiple sources told https://t.co/XBNn1eMJ5K Thursday.https://t.co/bvJJ2lOWaB

A very, very, very pro-Tom Herman Texas source told me minutes ago that he is hearing that Tom Herman has accepted the LSU offer.

First off, there’s no reason that folks around LSU would try and leak this news during a game they were playing on Thanksgiving. But, I believe there was an angle that the people with Texas ties were trying to exploit. Once Texas boosters caught wind that LSU was in negotiations with Tom Herman, they wanted that information out there ASAP. Why? Because many of them want to see Tom Herman replace Charlie Strong in Austin. By leaking the news, UT boosters possibly stall the discussions in Baton Rouge, or at least get people in and around LSU heightening their discussing and debate of Herman vs. Orgeron vs. Jimbo.

The reports seemed premature because it had been reported that interim head coach Ed Orgeron was scheduled to meet with AD Joe Alleva on Friday and pitch himself for the job. Part of Orgeron’s plan is to reportedly sell the University on his ability to hire a top-notch offensive coordinator.

Also, the pro-Tom Herman crowd at Texas may be trying to scare Greg Fenves to make a quick and rash decision on Charlie Strong. Or, could this be coming from the Herman camp? They may colluding with Texas boosters, who then leaked it to the media, as a way to try and get even more leverage in a potential negotiation with Texas in order to maximize salary and years in a given deal.

There are many reasons that news like this started leaking the night before Texas’ final game, when it was most recently reported that Charlie Strong might very well be able to retain his job if he can beat TCU on Friday. This reportedly infuriated many Texas boosters, the same ones who thought they could legitimately land Nick Saban in 2013 (clueless much?).

Ironically, here was the follow up tweet from ESPN a couple hours after the Herman, LSU news started leaking. This defense my belief that what has gone on over the past 12+ hours is posturing by Texas folks.

UPDATE: Tom Herman hasn’t ruled out an offer from Texas, if Charlie Strong is fired after tomorrow’s game vs TCU. https://t.co/oGfos1H4oD

If Herman ultimately lands at LSU, it would be great news for Charlie Strong’s chances of getting a fourth season in Austin. With Herman off the board, what direction could UT realistically turn? Dabo Swinney and John Harbaugh are total pipe dreams and are not going to happen. The remaining crop of guys like P.J. Fleck and Philip Montgomery aren’t names that will truly excite the boosters and fan base, and won’t justify spending the $10 million buyout for Charlie Strong and $6 million  buyout for his assistants.

It’s Tom Herman or bust for those crazed UT boosters.

Regardless, Tom Herman is on his way out of Houston. Cougars fans can try and convince themselves otherwise, but there is now way, with the quality of job(s) out there (LSU) and the quality that might be out there (Texas, Texas A&M, Oregon), Herman is gone. Remember that #HTownTakeover thing from over the summer? We got crushed by Houston fans over the summer for our report of his reps meeting with Baylor. They claimed Herman was there for the long haul and was a loyal Cougar. That was cute. Now, they’re getting their dose of reality.

Whether it’s LSU or Texas … Tom Herman is leaving town. The next 24-48 hours will be fascinating to monitor. Keep it here at Heartland College Sports for all the latest news.