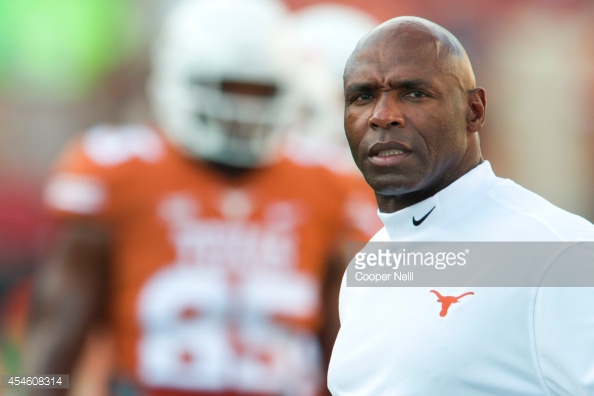 Texas has decided to move on from Charlie Strong, firing him as the head coach.

After a 16-21 record over 3 seasons, ending with Friday’s 31-9 loss to TCU, the University of Texas announced Saturday morning the firing of head coach Charlie Strong.

The University and Coach Strong each released statements on the parting of ways, with Strong saying:

“It’s a very difficult day for me, my family and all of the people affected by this decision. I’m most disappointed for these kids and our staff who have poured so much of their lives into this program for the last three years. I do understand that it comes down to wins and losses, and we have not done our job in that area yet. I accept full responsibility for that, but know in my heart that we accomplished our primary goal, which is the development of young men. We have had a positive impact on our campus and the community, and I’m proud of how our team is focused on earning their degrees. We were developing something really special. This program has a championship foundation built on great young men with tremendous character. There are very bright days ahead, and I’ll be pulling for these kids no matter where I am. I want to thank everyone who supported me and this program for the last three years. I don’t regret coming to Texas. I learned a great deal and grew as a person in my time here. I’ll miss the opportunity to lead this program going forward, but I’m ready to accept my next challenge.”

The statement from Texas AD Mike Perrin read as follow:

“Decisions like this are tough to make. The responsibility is not taken lightly. I became friends with Charlie Strong before becoming Athletics Director. I have the utmost personal respect for him. His impact on college athletics and student-athletes should be celebrated. Coach Strong represented The University of Texas with class and dignity, and he demanded our student-athletes do the same by adhering to his system of core values. However, after thorough evaluation, the body of work over three seasons has not shown the improvement we were hoping for. This was an important year for our program to take the next step, and the results simply aren’t there, so we’ve decided to make a change. We appreciate Coach Strong so much, are grateful for all he has done with our program and wish him the best in the future.”

President Greg Fenves also released a statement on the firing of Strong, saying, “Charlie Strong is an outstanding leader and role model who worked hard and with great integrity to move Longhorn football in the right direction… In the end, the results over three seasons were not there. It was not clear the future was going to be at the levels expected of Longhorn football.”

Stay tuned at Heartland College Sports for all the latest Big 12 news, information, and opinions.