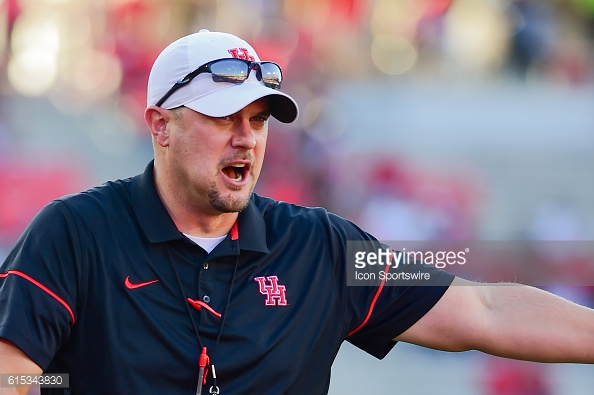 The Texas Longhorns have hired Tom Herman to be their next head coach.

In the least shocking news of the day, Herman is reportedly planning to leave Houston to become the next head football coach at the University of Texas, according to multiple reports.

The news came less than an hour after Texas announced it was parting ways with Charlie Strong after three seasons.

Herman burst onto the scene last year in his first season with Houston. In 2015, the Cougars went 13-1, which included a American Athletic Conference title and a Peach Bowl win over Florida State. The Peach Bowl was the Cougars’ first New Year’s Day bowl game in 30 years.

This season, Houston got off to a fantastic start beating Oklahoma, but stumbled in October with losses to Navy and SMU, and ended with a loss on Friday to Memphis. Also, the Cougars defeated No. 3 Louisville earlier this month.

Before joining the Cougars, Herman was considered one of the top coordinators in the country, running the offense for Urban Meyer at Ohio State from 2012 to 2014.

But, Herman’s ties run deep in the Lone Star State. His career began as a graduate assistant with the Longhorns under head coach Mack Brown (1999-2000) and also included stops at Texas Lutheran, Sam Houston State, Texas State and Rice.

During his time at Houston, Herman went 6-0 against ranked teams.

The Alabama Crimson Tide welcomed the Oklahoma Sooners and the Texas Longhorns to the Southeastern Conference on Friday via social media. Both...