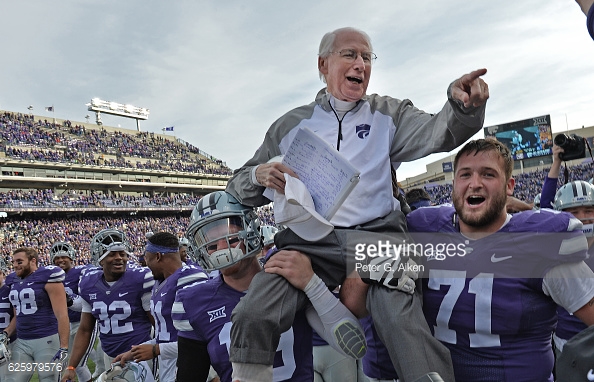 Kansas State head coach Bill Snyder won his 200th career game and once again proves he’s in a league of his own.

But, when it comes to Snyder pulling this off in Manhattan, Kansas, it will go down as one of the most amazing, while also overlooked, successes in college football history.

When Bill Snyder became the head coach of the Kansas State Wildcats in 1989, the program had won 23 total games over the previous 10 years. In the previous two years before Snyder took over, Kansas State was 0-21-1.

In the history of Kansas State football, the Wildcats had won 8 games only twice in a season: their inaugural season of 1912 and then again in 1931. Bill Snyder was taking over a program that had had as little success as any team in the country, up to that point.

By comparison, Snyder is in his 25th season and just won his 200th career game, meaning Snyder has averaged exactly 8 wins per season.

When you look at the job Snyder did turning around an absolutely dormant football program and hanging around for decades to see it through, it’s unprecedented.

When Joe Paterno took over at Penn State for long-time head coach Rip Engle in 1966, he was building on the program Engle had built. In 16 seasons, Engle only had one season where he didn’t finish above .500, that was in his final season, going 5-5 in 1965.

Tom Osborne took over for Bob Devaney at Nebraska in 1973 and was inheriting a program that had won National Championships. Osborne’s run was outstanding in its own right, but the success was there before Osborne took over the top job.

In Provo, Utah, LaVell Edwards replaced Tommy Hudspeth in 1972. Edwards is the closest comparison to what Snyder has accomplished, as Edwards helped make BYU football nationally relevant. But, even in Hudspeth’s eight seasons, half of them were above .500, with 1966 the high point with 8 wins.

Chris Ault took over Nevada in 1976. While the comparison is difficult, since the Wolfpack was a Division II program when Ault became head coach, he still inherited a team that had middling success going 32-31-1 in the previous six seasons under Jerry Scattini.

Last but not least is Vince Dooley, who is credited with turning Georgia into a nationally relevant program. But, to compare anything he did to Bill Snyder is apples to oranges as well. Dooley followed up Wallace Butts and Johnny Griffith in 1964. While Griffith’s brief stint was unsuccessful, Butts had multiple 10+ win seasons in Athens.

As you can see, while all the men above are fantastic coaches, none of them did what Bill Snyder has done. The improbable turnaround from doormat to quality Power 5 program that has twice reached #2 in the national polls is unheard of. And in today’s competitive and pressure-packed landscape of college football, we may never see anyone do what Bill Snyder has done in Manhattan.

On busy rivalry Saturday, some of the bigger names in the sport did congratulate Snyder on his accomplishment.

Just wanted to congratulate @CoachBillSnyder for a monumental win today. Win #200!! Crazy to think all that he’s accomplished at Kansas St!

Congratulations to the most classy man I have ever covered @CoachBillSnyder on his 200th win today!

As for how he did it? After the game Snyder said, “I probably do not sound in a very good mood, but I am responsive to how we played, and today we played rather ugly. I do not feel good about that, I assure you.”

That’s the kind of attitude, even at 77 years old, that allows one to do what Bill Snyder has done at Kansas State.