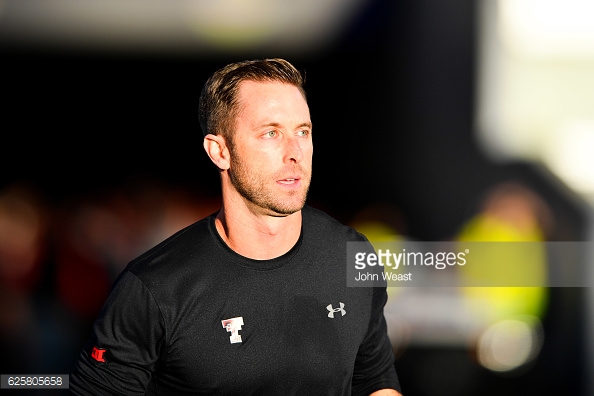 Questions remain at Texas Tech for Kliff Kingsbury, Kirby Hocutt and the future of the Red Raiders football program.

The Red Raiders could not have asked for a better ending to their season than the 54-35 thumping of Baylor on Friday night at AT&T Stadium. The loss snapped a three-game losing streak (Texas, Oklahoma State, Iowa State) and sends a Texas Tech team that is not going to a bowl game out on a high note in 2016.

But, despite the win and the sigh of relief, there are still several questions surrounding the Red Raiders and the future of the program under Kliff Kingsbury.

First off, despite what some fans want to believe, Kingsbury is safe heading into 2017. His buyout is pushing $10 million and that’s not something folks in Lubbock want to absorb. In his Sunday press conference, AD Kirby Hocutt said in his press conference, “I believed in Kingsbury when we hired him. I believe in him today.”

To be fair, there’s also the fact that Kingsbury has a longer leash than most coaches because he is an alum and played for the Red Raiders.

And when it comes to his using his alum-status to his advantage, Kingsbury knows exactly what to say. Following the win over Baylor, Kingsbury was reflecting on a frustrating season and said, “I just hate losing and I feel bad about when Texas Tech doesn’t win because it means a lot to me. I know it means a lot to our fan base and our student body and our alumni, and when you’re part of that, you wear it. And so yeah, more than anything, that’s what I feel. I try not to focus on the pressure (of keeping my job); you try to focus on each game and making sure you’re doing right by the players and putting them in position to win the game.”

Come on! How do you fire a guy like that!?

In all seriousness, there’s no question that his status within Texas Tech before he was hired as the head coach has allowed Kingsbury to avoid much of the criticism others in his position may have.

Hocutt did admit that he would like to see Kingsbury get more involved with the defense and that the day-to-day duties may change. That has been Kingsbury’s biggest flaw. He comes across like an offensive coordinator who happens to be the head coach, instead of taking on all the roles that involve being the head coach.

The bigger question is quarterback Patrick Mahomes and his possible decision to bolt to the NFL. After the Baylor win, Kingsbury commented on that topic saying, “I know what I’d like to tell him. But we’re going to get the grade back. We’ll submit that tomorrow, get the grade back, talk with his parents through the entire process and just figure out what’s best for him. If, you know, the money is right and he needs to go and do that; but, if it’s not, if there’s some way we can improve and improve his skill set and his talent, then he’ll come back and we’ll do it again. So, we’re going to have a thorough process and do what’s best for Pat.”

I understand quarterbacks get drafted high, but I don’t think Mahomes is ready for the NFL. So much of his success to this point has been based on his superior athleticism. At this same time, it’s hard to begrudge Mahomes for possibly deciding to declare for the Draft, especially if he believes he’ll be returning to a Texas Tech team that, at best, will make a bowl game. Were the Red Raiders returning a potential Big 12 championship-caliber team, then that might be a more legitimate factor for Mahomes to consider.

But, there are reasons for Mahomes to consider remaining in Lubbock. Number one is financial reasons. Let’s be honest, Mahomes’ father was a Major League Baseball player, he does not need to rush to the NFL to help feed his family. He is fortunate enough to have the luxury to wait, improve his craft, and improve his draft stock.

One of the things holding Mahomes back is the style of offense Texas Tech runs is not a pro-style system. The flip side? When you figure that Cal’s Jared Goff was the number 1 overall pick last year and he didn’t play in a pro-style system and isn’t half the athlete Mahomes is, it’s easy to understand why the Texas Tech QB might want to move on and take his chances at the next level.

As Kingsbury noted in his comments, he desperately wants Mahomes to come back. Without Mahomes next season, while Nic Shimonek proved he can play, the Red Raiders would be near the bottom of the Big 12 standings.

Defensively, the Red Raiders are still a mess. David Gibbs was brought in to create a defense that forced turnovers. Well, the Red Raiders have been terrible in that department all season (9th in the Big 12 in turnover margin). That is, until Friday when they finally forced four turnovers. So, what was different Friday? “Yeah, I think the effort was a lot better,” senior cornerback Justis Nelson said.

That’s concerning. Very concerning. A player admitted the effort was not there like it should have been over the past several weeks.

That cannot happen. Not at this level. Not with the challenges and issues that this program has had in recent seasons.

Fans can understand not having the personnel to win games. But not giving the effort? Inexcusable.

Athletic director Kirby Hocutt’s meeting with the media on Sunday went about as many expected. His faith is there in Kingsbury as they turn the page to 2017. But, let’s be honest, if he had announced changes will be coming to the staff … who could blame him?