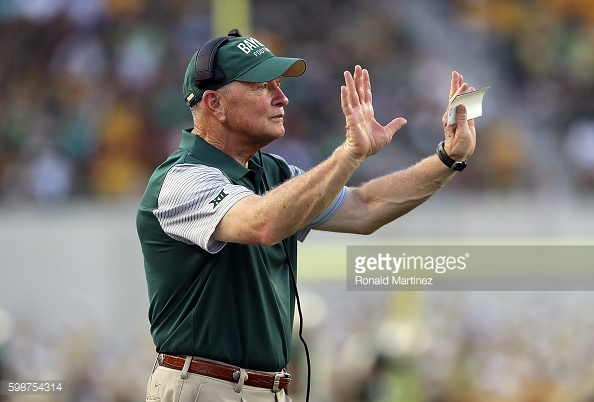 As Baylor continues its search for a new head coach, Jim Grobe officially removed himself from the running.

Grobe spoke to the media on Monday and made this official statement regarding his standing for the Baylor job.

“Several weeks ago, I think it was after Oklahoma State, I told Mack (Rhoades) that I was not a candidate for this job. He’s been great to me, and more than once the old coach if I’ve had a change of heart. He’s been very gracious to me.

“I wish, honestly, I could turn the clock back and have Mack Rhoades as my athletic director. We’ve become very close. I think Mack Rhoades has great character, great common sense, great patience, great kindness, and is a very strong leader. There’s a toughness about Mack that appeals to me that I really, really like.

“But honestly, football needs a fresh start.  All the other sports here are in great shape right now, and I would expect the next coach to have football competing for championships in a hurry.

“Whoever gets this job is going to be very fortunate.”

Obviously, this is not in the least bit shocking. Grobe will be 65 years old in February, and while that isn’t old (Nick Saban is 65), Grobe had been out of the game for a while (2013, Wake Forest).

But, while Grobe has made some flubs during various press conferences, overall, he has handled himself with complete class in an incredibly difficult situation.

Grobe is a native of Huntington, West Virginia, and brings the Bears into their regular season finale this weekend against the Mountaineers in Morgantown.

Grobe was asked in his press conference if he would be interested in a different role in the Baylor athletic department, but he was noncommittal on the topic. He would be a great guy for any program to bring in for an advisory-style role.

Whatever Jim Grobe ends up doing after this stint at Baylor, he’s gained even more respect than he already has in the college football community.