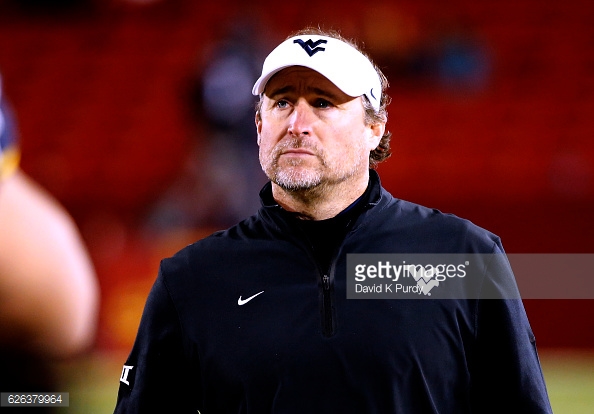 Can Houston really lure Dana Holgorsen away from West Virginia?

The coaching carousel was plenty busy over the past few days. Charlie Strong was fired. Ed Orgeron got his interim tag removed at LSU. Texas, predictably, hired Tom Herman away from Houston. That leaves the Cougars with a job opening, and there have been multiple rumors that Power 5 coaches may be targeted and actually have interest in the job. One of the most common names to surface on the list, none other than West Virginia’s Dana Holgorsen.

Before going any further… yes, it seems insane. Well, it is insane. At first, I took this as just silly message board fodder. But, as the days have gone by, there have been reputable and legitimate college football reporters who have been writing and debating about the possibility of Holgorsen landing back in Southeast Texas.

The reasons cited behind Holgorsen’s possible decision to consider Houston go as follows:

1. Money: The belief is that because Dana Hologorsen is only making $3 million per year, the same that Tom Herman was making, he can be poached from Morgantown. Not only that, but Houston megabooster Tilman Fertitta said that if the program lost Herman, it would not be over money, implying they will spend big for the right person.

Crazy because: Holgorsen is likely going to finish the regular season 10-2 after beating up on a dejected Baylor team on Saturday. Sure, Hologorsen has been looking for an extension, but until this season, he didn’t deserve it. Prior to the 2016 campaign, he was 15-21 in conference games over 4 seasons in the Big 12. For the most part the Mountaineers had held there own, but there was still plenty for the head coach to prove. Only once in the 4 Big 12 seasons had West Virginia finished above .500 in conference play (5-4 in 2014).

Well, Holgorsen proved everything he needed to, and more this year. And you better believe that whenever this season comes to an end, Dana Hologorsen will have a nice contract extension, and pay raise, sitting on his desk.

2. Location: The belief here stems from the fact that Holgorsen has ties to Houston when he was offensive coordinator and quarterbacks coach from 2008-2009 and that being in such fertile recruiting ground would be appealing.

Crazy because: It’s still a Group of Five job. Let’s be honest, the AAC has become a place for coaches who need to prove they are capable of running a program go to learn how to do the job. Once they show they can “do it”, they are jumping for Power 5 jobs. That’s how it has gone and that is how it will continue to go for as long as college football’s system is currently set up both structurally (College Football Playoff) and monetarily (disparity between television money for Power 5 and Group of 5).

No one in his right mind would leave a Power 5 job coming off a 2-loss season for a Group of 5 job, regardless of the recent success had by the Group of 5 team.

As for the appeal of being in the high-quality recruiting area of Southeast Texas, Holgorsen has proven he doesn’t need it. On the Mountaineers roster there are just 5 players from the Lone Star State. He has 14 players on his roster from Florida and a staggering 34 from West Virginia, along with 16 from Pennsylvania. It’s taken him some time, but Holgorsen has figured out how best to recruit to have success in Morgantown.

When it comes to other reasons someone like Dana Holgorsen (or Cal’s Sonny Dykes, whose name is also being floated) would be very unlikely to take the Houston job, competition comes to mind. Sure, the money at the Power 5 level is substantially more, but any person with a competitive bone in their body wants to compete in their industry at the highest level. Yes, a school like Houston can, in theory, make a College Football Playoff. But, they would need to go undefeated, while also having a very quality non-conference schedule.

For Dana Holgorsen, he would go from coaching against schools like Oklahoma, Texas, and Kansas State, week in, week out, to having to get himself jacked up to go face Tulane, UConn and East Carolina.

The point of this piece is not to rip the AAC and Houston. The Cougars are a quality program with great facilities and they will land a very good head coach. The AAC is the best of the Group of 5 and has some really good teams (Houston, Navy, USF) and coaches (Chad Morris, Ken Niumatalolo, Willie Taggart). But, it’s not the Power 5.

Throw in the fact that Hologorsen’s son, Logan, is a high school sophomore, and a quarterback, in the Morgantown area, and it none of it adds up.

Dana Holgorsen is about to wrap up his 6th season in Morgantown. He’s finally got this program to where he wants it. He has the quality personnel and the depth to to compete in this conference. Would he really throw away six seasons of hard work to go to Houston? No shot. It would make no sense.