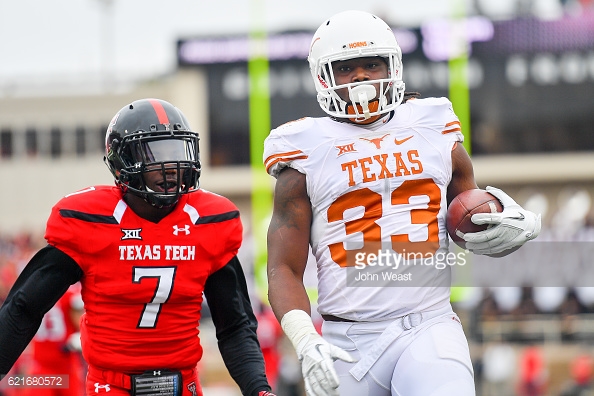 There’s just no discussion that needs to be had on this topic. I know Texas fans want to see their 2,000-yard rusher, their first, and only, since Ricky Williams in his 1998 Heisman-winning season, back in the burnt orange in 2017.

But, if Foreman knows what’s best for his future, he needs to move on from Austin.

Foreman’s father, Derrick, told Horns Digest on Monday that his son had not yet made a decision on his future. Foreman said they had spoken to agencies, but added, “He’s waiting to speak with Coach Herman. Then a decision will be made pretty soon after either way. He doesn’t want to have the process drawn out.”

Then, on Monday night, Derrick Foreman’s frustration seemed to boil over onto Twitter:

Apparently it doesn’t matter what I say regarding D’onta.Reports are still coming out about him signing with an agent.Its NOT true! I’m done

But, Foreman added on Tuesday morning that his son had made up his mind:

Despite false agent reports,after speaking with his mom,brother,myself,Coach Herman..D’onta has made a decision on his future.All I’ll say!?

My hope for Foreman is that he does wind up declaring for the NFL Draft. There is nothing left for him to prove at the college level. Foreman rushed for over 400 more yards than any other running back in the Power 5 conferences and did it all in just 11 games, with every opponent coming from the Power 5.

But, Foreman has the ability to be an every-down running back because his blocking ability is just as strong has his rushing prowess.

Plus, given his position, Foreman should quickly realize that the formula for a running back must go as follows: prove as much as you need to in college, while putting your body through as little punishment as possible, and then jump to the NFL. The shelf life of running backs have continued to decrease in recent seasons, with many seeing a major drop off in their late 20s.

Foreman was worked by the Longhorns this season. While he led the country in rushing yards, he also led the country with 323 carries, 16 more than Wyoming’s Brian Hill, and 52 more than the closest player in the Power 5, Wisconsin’s Corey Clement. It’s entirely possible that another 2,000-yard season, combined with another 300+ rushes at Texas in 2017 will actually hurt Foreman’s NFL Draft stock for 2018.

Just look at how the running back position has been devalued by NFL teams in recent years.

Here are the number of running backs taken in the first round in recent seasons.

Plus, over two years ago, Jason Fitzgerald at OverTheCap.com penned this piece about the devaluation of the running back position and how earnings for running backs will decrease in the future, writing, “Moving forward we are going to be looking at a position that at best may end up no higher than $5 million and year and could be capped closer to $4 million… But we are almost there and it sure seems to be just a matter of months before the market for Kickers, Punters, and Running Backs will be within just a few dollars of each other.”

Since the article was written in 2014, I went over all the free agent running backs signed in the past 3 offseasons. There have only been 3 players to sign deals that were worth more than an average of $4 million per season: Chris Ivory (2016), Lamar Miller (2016), and DeMarco Murray (2015).

By comparison, Fitzgerald’s theory has proven true as there were 4 kickers and punters who signed deals worth an average of between $2-3.5 million this past offseason alone. That’s more than were signed in that price range from 2012-2015 … combined.

D’Onta Foreman needs to understand this and see the writing on the wall.

Sure, it would be fun and there would be personal benefits to staying in Austin in 2017: his brother, Armanti, plays for Texas, head coach Tom Herman brings a new perspective and level of excitement to the program, and I believe that if Foreman stayed, this team could compete for the Big 12 Championship next year.

If Foreman played any other position, I’d fully support him staying to try and hone his craft and enjoy another season and year in college. But, at the running back position, time, age, and carries are everything.

It was a blast while it lasted, but if you’re really interested in what’s best for D’Onta Foreman, you should wish him well at the next level.