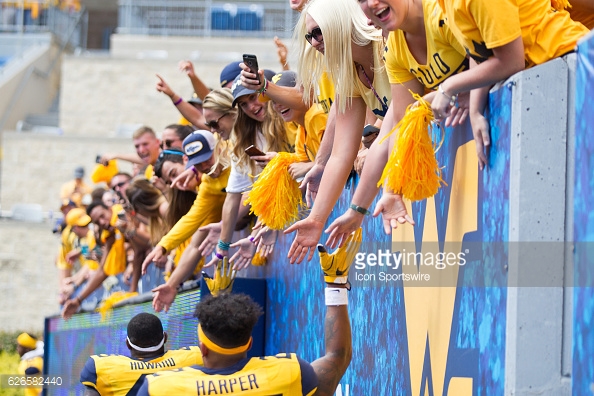 With the West Virginia Mountaineers approaching a 10-win season in 2016, Dana Holgorsen has the program humming.

Three months went by fast for a West Virginia fan this year. A 9-2 record with a very winnable game slated for this Saturday against a downward-spiraling Baylor team will do that to a WVU fan.

Sure, those two turnover-heavy losses against the Oklahoma teams stung, but spirits are high in the Appalachian Mountains.  Let’s look in the rearview mirror for a moment…  Three months ago, almost everyone was predicting WVU to finish in the middle of the pack of the Big 12.  Even my ever-most positive friend picked the Mountaineers to finish 9-3, which could still happen. A five-loss season with questions about WVU Athletic Director Shane Lyons extending Dana Holgorsen’s contract was the norm in West Virginia.  Great. Just great. It was shaping up to be another mediocre year for Mountaineers fans just hoping to make a bowl game, a split fan-base regarding the head coach, contract extensions resulting in recruiting concerns… the list went on and on.

Now, fast-forward to the present.  Who would of thought West Virginia would be sitting at 9-2, possibly soon to be a 10-2 season, which has only happened eight times in 125 years. The defense is as solid as it gets in the Big 12 and most fans are screaming at Lyons to extend Holgs’ contract.

One of the biggest surprises has been CB Rasul Douglas who should be a strong consideration for the Big 12 Defensive Player of the Year conversation. Whether you love him or hate him, QB Skyler Howard, aka Mr. Chip on the Shoulder, aka Stephen F. Austin walk-on, aka I wear my heart on my sleeve, has been getting it done. Shelton Gibson is creating chaos for every secondary he faces.  The offensive line has done their job.  It’s been a great season, we’ll take it.

Thanks to WVU’s success, the name Dana Holgorsen is now being slung into the annual end-of-year coaching carousel. The rumors may lead to sleepless nights as a fan, but it’s the price we’d all pay to go along with a great season.  Most Mountaineer fans are hoping that the contract talks between Lyons and Holgs have been going on behind the scenes, with an announcement coming after the Baylor game. From what we’ve heard at HCS, this is believe to be accurate.

For the record, I don’t see the Ducks hiring Dana.  Oregon will go for a bigger name or someone with a better resume than what Holg’s tenure has shown at West Virginia.  As for Houston, well we know Dana’s the at the top of Santa’s wish list for the Cougars, and they haven’t kept that a secret… but why would Dana leave a P5 school to a G5 school?

Regardless, WVU would make a huge mistake letting Dana walk.  What coach, that West Virginia could afford and attract, could waltz into Morgantown and pick up where Holgs left off? Please, don’t say Rich Rodriquez. It ain’t happening, this isn’t the Big Easy…err Big East.

No one wants more re-building years.  Dana Holgorsen has finally built his program, recruited his players, and found his coaches. More importantly, this is first time West Virginia has ever had depth on their team that can actually compete in Big 12 play.  This has always been our Achilles heel while joining the Big 12 and it showed in conference play.  We’ve seen key injuries this year at safety, running back, and now wide receiver with Ka’Raun White recently breaking his right leg against Iowa State. Guess what, someone steps up and fills the gap.

A perfect example of this is our banged-up running back situation.  Who will be healthy enough to play against Baylor?  As Holgorsen said, “At this point, who cares? Whoever’s going to go in there is going to play good, so why does it really matter?” I guess you can say this after your 4th string redshirt-stripped running back Martell Pettaway has 30 carries for 181 years in his debut.  And one more thing Mountaineer fans will remind you of… pending NCAA eligibility of course, Florida QB Transfer Will Grier is now in Morgantown and could bring nightmares to Big 12 coaches in 2017.

Most of the bowl predictions for West Virginia are the Alamo Bowl and Russell Athletic Bowl.  Some Mountaineer faithful would prefer the Orlando, FL destination for travel purposes and a chance against a bitter rival Virginia Tech, but since they face each other in the 2017 opener, this bowl matchup may be diverted.  Florida State perhaps? Miami? Louisville? It’s going to be a fun weekend.

The Alamo Bowl is most likely to take Oklahoma State if Oklahoma wins at home this weekend, but if West Virginia were to land here, a frightening matchup against a USC team that no one wants to face could likely happen.  Yikes…

After a disappointing, fatigued loss to Temple last week, the Mountaineers quickly bounced back with a lopsided win against Manhattan setting a school record 40 turnovers. Yes, I said 40.  “Press Virginia” is back this year.  However, Coach Bob Huggins will have his hands full this week with a Virginia Cavalier team that has been playing some of the best defense in the nation. West Virginia has been living up to its nickname, overwhelming teams with full court pressure and points off turnovers but the Mountaineers will face their biggest challenge so far by executing their half court offense, in Charlottesville.

This team could be fun but also frustrating to watch this year.  We’ve already seen making free throws is an issue.  The largest development this year is watching sophomore forward Esa Ahmad step up as a leader on this team in recent games. If Ahmad continues to gain more confidence in his play, he will be a top Big 12 player before leaving Morgantown.

Replacing Devin Williams and Jonathan Holton will not be an easy task. But senior forward Nathan Adrian and Elijah Macon are showing promise.  True Freshman Sagaba “Sags” Konate can stay out of foul trouble, you may be seeing more and more minutes from him come Big 12 conference play.  The Mountaineer backcourt is loaded with talent and depth.  Javon Carter, Daxter Miles Jr., and Tarik Philip return with great ball handling skills, defense, and shooting.  Teyvon Meyers will bring instant offense during scoring droughts.  Two players that fans are wanting to see come out of their shell are Lamont West and James “Beetle” Bolden both coming off redshirts.

Last, but not least, a huge congrats to Women’s Soccer team and Head Coach Nikki Izzo-Brown on reaching the Final Four.  Izzo-Brown built this program and now brings her Big 12 championship team against the powerhouse Tar Heels of North Carolina this week.