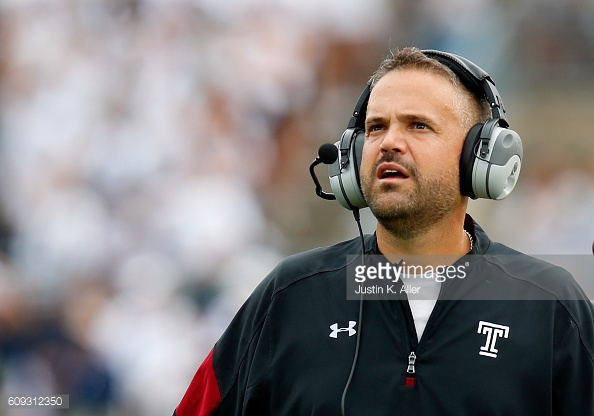 The hire of Rhule by Baylor appears to come out of left field. It was believe that Baylor AD Mack Rhoades wanted someone who had coached in Texas and had coached at the high school level. Rhule does not check off either of those boxes.

He’s certainly built up an impressive resume and must have blown away Rhoades and the powers that be at Baylor during the interview process.

In Baylor’s official release, Rhaodes said, “We could not be more excited to welcome Matt, Julie and their children to the Baylor Family. When we set out on our search for a new leader of our football program, we wanted a coach who shared our values, who had demonstrated success, who showed a true commitment to the overall student-athlete and who we believed could lead Baylor to a national championship. We found all of that and more in Matt and I know that he will be a perfect fit with the Baylor Family.”

Rhule is an east coast guy who grew up in New York City, before his family moved to State College, PA, where he played for Penn State under Joe Paterno in the late 1990’s.

Rhule made coaching stops at Buffalo, UCLA, and Western Carolina, before being hired by Temple as the defensive line coach in 2006. He then spent time in the NFL as the Giants offensive line coach in 2012, but returned to Temple after one season to become the head coach and replace Steve Addazio, who had left for the job at Boston College.

As for Rhule, he said in the press release, “I am truly honored and humbled to join the Baylor Family, and I can’t thank President Garland and Mack Rhoades enough for this incredible opportunity. Baylor is a tremendous institution with a history of football success and I know the passion that so many have for the Bears will help bring the community together to reach even greater heights. I am excited to get started.”

Another impressive twist on this hire comes from CBS Sports, who reports that Rhule turned down Oregon in favor of Baylor.

Rhule led the Owls to a 1st place finish in the East Division of the AAC in each of the past two seasons, while going 20-7 overall.