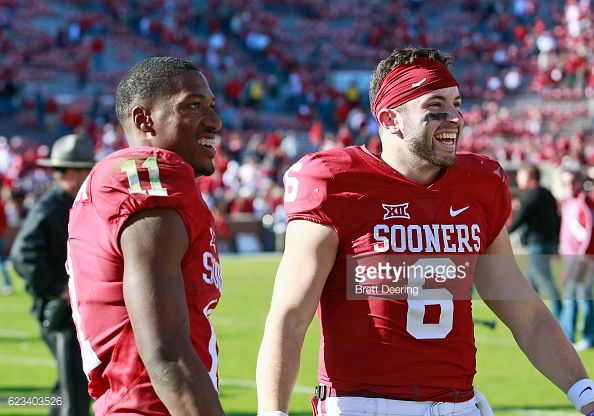 Mayfield and Westbrook will be in New York City this weekend and join other finalists, Louisville’s Lamar Jackson, Michigan’s Jabrill Peppers and Clemson’s DeShaun Watson. All of the candidates were announced on Monday Night Countdown.

With Mayfield and Westbrook being named finalists, the two becomes just the 5th pair of teammates to attend the Heisman ceremony in its history.

Baker Mayfield has the best passer efficiency rating in the country of 197.8, while Westbrook has a total of 1,465 receiving yards and 16 touchdowns.

To show how the Heisman Trophy has been dominated by quarterbacks and wide receivers in recent years, Westbrook is just the second wide receiver to be a finalist for the award since Larry Fitzgerald in 2003.

It’s also the first time since 2004 that OU, or anyone, will be sending two candidates to New York.

Baker Mayfield and Dede Westbrook (@OU_Football) are just the 5th pair of teammates to attend the Heisman ceremony. pic.twitter.com/SKu6plbWtb

The Heisman Trophy ceremony takes place Saturday night at 7:00 CT, and will be broadcast on ESPN.
**If you want a chance to win FREE Big 12 gear from your favorite team, be sure to sign up for our weekly newsletter! **