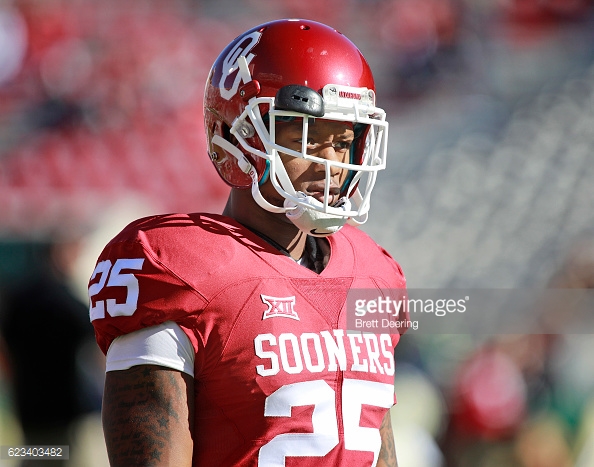 The Oklahoma Supreme Court has ordered the release of the video of Sooners running back Joe Mixon punching a female student in the face in the summer of 2014.

The Shot Heard Around the World. That’s what they’ll soon call it. The home run given up by Ralph Branca to Bobby Thompson in the 1951 NL Playoffs will be a thing of the past.

I don’t mean to make light of what happened on July 25th, 2014 just north of the University of Oklahoma campus. But, it’s a sign of what’s to come.

This story of Joe Mixon punching out Amelia Molitor at a Norman restaurant has been well known and followed closely by folks around Oklahoma and in the Big 12 for over two years. To a lesser extent, the college football world has followed it, but has mostly just kept tabs on the story. The hard news world has, for the most part, stayed away from it.

But, with the news coming down Tuesday that the video will be released to the public, this opens Pandora’s box for Bob Stoops and the University of Oklahoma.

Mixon pleaded guilty to assault after the 2014 incident and was suspended from the team for his freshman season. He did not serve jail time and was ordered to perform 100 hours of community service.

But, he ultimately came back to the Sooners football team and has played, and had enormous success, the past two seasons.

With the election of our lifetime in the rear view mirror, the mainstream media is looking for new stories to freshen up their nonstop coverage of the president-elect’s latest tweets.

Once this video is released, I expect a contingent of major media outlets, from CNN, MSNBC, Fox News, and more to make their way down to the Sooner State in a way they haven’t since the EF5 tornado ripped through Moore in 2013.

Now, if the media does make a land rush in Oklahoma, would that necessarily be wrong? Yes and no.

No, because I have often written that Joe Mixon has no business playing football for the Oklahoma Sooners. I’ve firmly believed that if Mixon had not been a 5-star recruit he would’ve been off of campus within a week of the incident taking place.

Yes, because most of what the media will do is sensationalize every angle of this story ad nauseam. Some examples of angles I believe the media will take include, “Is college football too important in our fly over states?” and “Women’s rights continue to be disrespected by a male-dominated society.” It will be typical mainstream media BS, where they pretend to be fighting for a cause to create a more inclusive society, but simply put people into selective groups and end up dividing it.

It will be bad press to the University and Norman, which will be the second time this will have happened in the past 20 months. Yes, I’m referring to the SAE racist chant caught on camera in March of 2015.

OU President David Boren and the rest of the leadership had an swift and excellent response to that controversy. But, the problem is, how will they explain this one? They all knew and has presumably seen the tape, so they won’t be able to play stupid.

If the video is just as bad as it’s believed to be, and as Ryan Aber of The Oklahoman described, then the University is screwed. In his piece from September of 2014, Aber wrote:

After a brief discussion, Mixon looks as if he’s going to walk away, but looks like he says something as he turns. Molitor then pushes Mixon, setting off a quick series of events that were over in three seconds. Mixon reacts to the push by lunging at Molitor with a closed fist at his side. She reacts by slapping Mixon near where his jaw and neck meet on his left side.

Mixon lands a devastating right hook that knocks Molitor off her feet. First she hits the table on her left ear, then falls to the ground, where she lays still.

Mixon walks out of the frame toward the front of the restaurant and is not seen again.

This can go one of two ways for Mixon: he leaves for the NFL Draft, the storyline moves away from Oklahoma, and he becomes a talking point for another team. Or, he becomes undraftable, has to return to Oklahoma for one more season in hopes the story becomes part of his past and time heals the wounds.

Now, there have been reports that NFL teams are starting to warm up to the idea of drafting Mixon, as there continues to be a strong belief that he was egged on by Amelia Molitor because of racial slurs she used, along with spitting in his face.

If true, that is disgusting and disgraceful, and Molitor is a grade A scum bag. But, I still can’t justify, as a world-class athlete, punching a female in the face and knocking her out cold. I will remain steadfast in believing that reaction to a woman is inexcusable, unless your life is in danger.

But, with the release of this video to the public, this will become a national news story. It could have a lasting effect on the legacy of Bob Stoops and David Boren. It all depends on how it’s twisted, spun, and presented.

Chaos is coming to Norman. You’ve been warned. To borrow a phrase from a Big 12 foe (Iowa State), “A Storm is Brewing”. Currently, we’re just in the calm of it.

Podcast: Morgantown recap and the College Football Playoff screw up
Houston will regret passing on Oklahoma’s Lincoln Riley
To Top