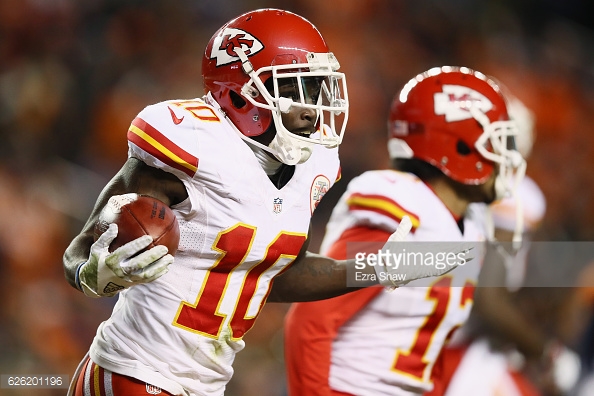 With Chiefs rookie Tyreek Hill taking the NFL by storm, it’s important to not forget his domestic abuse case from his time at Oklahoma State.

On the night of December 6th, 2014, Tyreek Hill was a hero and a legend in Stillwater, Oklahoma. After Bob Stoops and the Oklahoma Sooners inexplicably decided to rekick to Hill following an Oklahoma State penalty, Hill took the punt return 92 yards to the house to tie the game with under a minute left. The Cowboys eventually went on to win the wild shootout 38-35 in overtime.

Those tears of joy turned to tears of sadness and disappointment. Just six days later Oklahoma State University released a statement saying Tyreek Hill was dismissed from the football team after he was arrested and accused of punching and choking his pregnant girlfriend.

Part of that statement read, “Oklahoma State University does not tolerate domestic abuse or violence. Based on the evidence and the serious allegations that have been made, Head Football Coach Mike Gundy has announced that Tyreek Hill has been dismissed from the OSU football team.”

During Hill’s trial, Stillwater Police Sgt. Kyle Bruce testified that Crystal Espinal’s injuries were consistent with her sworn statement, which included alleged choking, tearing of her shirt, punching of her face and stomach while she was 8 weeks pregnant.

Hill eventually plead guilty to domestic assault and battery by strangulation and was sentenced to 3 years probation, an anger-management course, a year-long batterer’s program, and was required to undergo a domestic-abuse evaluation.

The 22-year-old ended up at West Alabama before being drafted in the 5th round by the Chiefs earlier this year. He has taken the NFL by storm becoming the league’s best punt returner, adding another touchdown return on Thursday night in a 21-13 win over the Raiders.

Hill now has two games with one punt return touchdown and one receiving touchdown, which is one more game than the rest of the NFL combined.

For those of us that watched Hill at Oklahoma State, what he’s done in the NFL isn’t shocking. He has world-class speed, combined with size and strength to succeed at any level.

But, his checkered past is not something that should be forgotten. A DUI, drug use, hell, even assault against another man, I could find a way to forgive at some point in time. But, punching your pregnant girlfriend in the stomach? It’s absolutely unfathomable.

Think about some of the characters Oklahoma State football has put up with in recent years, including Dez Bryant and Justin Blackmon. Both had issues, but neither really came until their NFL career began. Mike Gundy does not, in any way, run a program like Barry Switzer did in his heyday in Norman. But Gundy, like many other Power 5 programs, has likely brought in a guy or two with a red flag to his name because well, they’re really, really good at football. It’s part of the game. But, Hill did not appear to be one of those guys before arriving in Stillwater.

The fact that the Cowboys didn’t even take a wait-and-see approach with Hill, just days after he was a hero in the biggest game of the season, told me all I needed to know about the serious nature of these allegations and the likelihood there was some truth to them.

The NFL has even sold its soul, yes the same NFL that has handed down a lengthy suspension to Ray Rice for domestic abuse, by putting a picture of Hill as its Twitter banner last week.

Why has Hill’s past been such a minimal side story since his rise to the top? Is it because there is no video, as there was with Rice?

But, the better question: should that even matter?

I realize we are a visual society, but the idea that a video should matter in the public perception of a domestic abuser is beyond eff-up.

I’m a big believer in seconds chances, it’s what America was built on. But, this Hill case, similar to the Joe Mixon case, bothers me more than others because of the female angle.

I’m far from Mr. PC, but you will never convince me an All-American athlete like Hill or Mixon can use self defense as an excuse against a woman by literally beating her. It’s sickening.

So, as Tyreek Hill’s NFL journey continues, feel free to be happy for his comeback story.

I’ll be hoping to see Hill succeed, but for one reason only: thankfully his ex-girlfriend gave birth to a healthy baby boy in 2015. If Hill builds a solid NFL career, the child and the baby’s mother are taken care of. That’s why I’ll root for Tyreek Hill … the only reason.