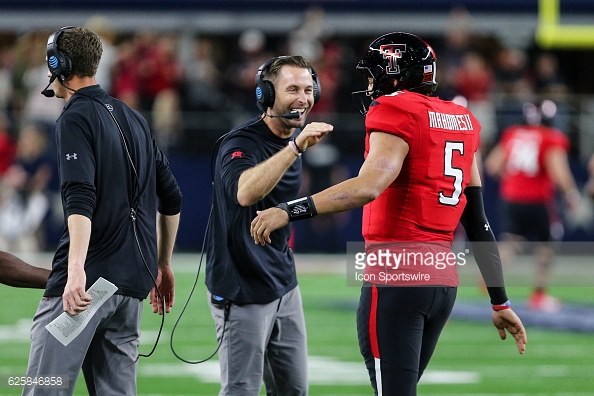 With Notre Dame QB DeShone Kizer announcing Monday he will enter the 2017 NFL Draft, some of the attention at the quarterback position turns to Texas Tech’s Patrick Mahomes.

Mahomes has not yet publicly made a decision. Maybe he knows, maybe he doesn’t. To date, it’ll be by far the biggest decision of his life.

When that decision gets made, I believe he should elect to return to Lubbock.

Last spring, I interviewed his father, former MLB Pitcher Pat Mahomes, and asked him about the NFL following the 2016 season. At the time, Mahomes Sr. told me, “We don’t really talk about. He knows when the time gets there what he’ll have to do. The numbers on the field will be there, but you go through the combine, gather all the information and see what everybody says and you make another decision. I know right now he loves playing at Tech… I’ve heard several other scouts tell me he’s still going to get drafted in baseball. So, he’ll have his options and we’ll talk about it and decide what’s best for his future.”

One of the advantages Mahomes has is that he does not need to feed a family and he can lean on his father, who as we mentioned, was a professional athlete. There are details Mahomes can learn from his old man about the pro sports world, things like slippery agents making fake promises and not getting caught up in your own hype.

We all know Mahomes put up the numbers, throwing for over 5,000 yards with 41 touchdowns to 10 interceptions. But, anyone that follows the NFL understands that NFL Draft picks at the quarterback position are rarely made based on success at the college level (names like Colt McCoy, AJ McCarron, and Colt Brennan come to mind).

Yes, Mahomes can be a great NFL quarterback. First off, he seems to have it between the ears. He’s a smart, savvy dude, who is humble but confident. That’s the most important part of the job. Secondly, he has the size (6’3”, 230), the arm, and mobility to do it all in the NFL. But, I do believe he’s a work in progress. Unless a pro team decided to take some of the college game and use that in their playbook, Mahomes will take a bit to absorb and learn the differences and nuances of a traditional, pro-style playbook.

Now, I happen to be Facebook friends with Pat Mahomes Sr. There is a Bleacher Report article that several friends and family appear to have posted on his page or tagged him in. At no point did he like or comment on the article which is titled, “Why Texas Tech’s Patrick Mahomes should enter weak NFL Draft class.”

As the author correctly notes, “First, [Mahomes’] Air Raid offense relates almost nothing close to an NFL system, and second, in a league run by quarterbacks, his 5-7 record in what might be his last year in Lubbock might be concerning.”

But, he the adds that Jared Goff came into the NFL with the same concerns, and he went Number 1 overall in last year’s draft.

That’s true. But look at what a disaster Goff has been. He wasn’t even dressed for Week 1 this season. He was that far behind in the playbook and getting up to speed with the NFL game. Since getting playing time he’s completing 55% of his passes with 4 touchdowns to 5 interceptions.

Think a team will quickly make the mistake of taking an Air Raid QB that high in the draft the next year?

Maybe they will. After all, Mahomes is a better athlete than Goff and has a better arm. And, let’s be honest, every team that doesn’t have a top-10 quarterback is looking for one. Quarterbacks have been and will continue to be overdrafted.

Obviously, we should all take mock drafts with a grain of salt. But, right now, CBS Sports mock draft does not have Mahomes as a first rounder. They have North Carolina’s Mitch Trubisky going No. 1 to the Browns and Notre Dame’s DeShone Kizer 12th to the Cardinals.

Sure, this can all change. But, at this point, it’s more likely than not that Mahomes would end up in the 2nd or 3rd round and end up on the bench somewhere.

Here’s what Mahomes and more importantly, Kliff Kingsbury should do: Mahomes should return to Lubbock and Kingsbury should make a commitment to working in some more pro-style schemes and adjusting his playbook in a manner that would help Mahomes for the 2018 NFL Draft.

While it’s fairly unprecedented for a college coach to drastically change some of his style and playbook to suit one player, it would help both the Red Raiders and Mahomes.

Kliff Kingsbury will be under immense pressure to win in 2018. Tech just missed a bowl game and Kingsbury is now 13-23 in Big 12 play. He has to start turning things around in 2018. The quickest way to do that is to get Mahomes back on campus. Nic Shimonek is good… but he ain’t Patrick Mahomes.

This can turn into a symbiotic relationship where Mahomes gets another year with more pro-style facets of the playbook to improve his draft stock, while Kingsbury returns one of the best quarterbacks in the country to hopefully turn things around in Lubbock and help make sure his job stays safe.

This is exactly that kind of outside the box thinking that Kingsbury needs to pitch to Mahomes.

If not, Kingsbury may soon find himself with some more free time on Sundays to watch his former protege at the next level.