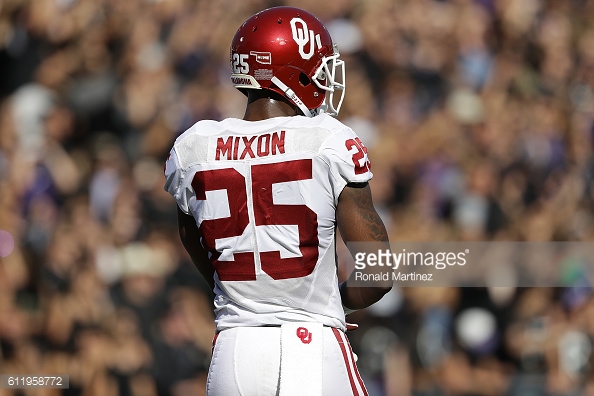 The video showing Oklahoma running back Joe Mixon punching a female student was released on Friday.

After weeks and months of discussion and debate, the long-awaited video of Joe Mixon punching Amelia Molitor in the face is here for the public to see.

In the video you can see how Amelia Molitor shoved Mixon, who then tried to scare her in return, but did not hit her. She then slapped both him, and that’s when the punch came down, flooring her with a right hook to the face. Molitor suffered broken jaw and cheekbone.

After the Oklahoma Association of Broadcasters sued to obtain the video, the Oklahoma Supreme Court ordered the release of a video last week.

The Associated Press was credited with acquiring the videos that show two angles of the incident.

Mixon released a statement through his lawyers, saying, “Mr. Mixon asked us to once again say he is sorry for the way he acted that night. He has publicly apologized to Ms. Molitor, her friends, his family, teammates, and the University. He hopes that his voluntary release of these recordings will help put this matter to rest.”

Meantime, the University of Oklahoma also issued a statement on Friday night: “University officials were made aware of the content of the video prior to taking action with respect to Joe Mixon. Based on that information, the university immediately suspended and removed Mr. Mixon from the football team for one year, during which high standards of conduct were expected and maintained.

“It was made clear to Mr. Mixon at the time of his suspension that violence against women will not go unpunished at the university. Coach (Bob) Stoops has been proactive in presenting training for his team aimed at preventing such behavior in the future. Sensitivity training in the area of violence has been intensified and best practices will continue to be implemented.

“Mr. Mixon has apologized for his actions and the university hopes that it is an indication that he has learned from his mistakes. We are an educational institution where we hope young people will learn from their mistakes and chart a better future course.”

Mixon pleaded guilty to assault after the incident in July 2014, but did not serve jail time, instead performing 100 hours of community service. The University of Oklahoma suspended Mixon for his freshman season.

Oklahoma takes on Auburn in the Sugar Bowl on January 2nd. We’ll see how the release of this video affects Mixon’s decision to enter the NFL Draft.