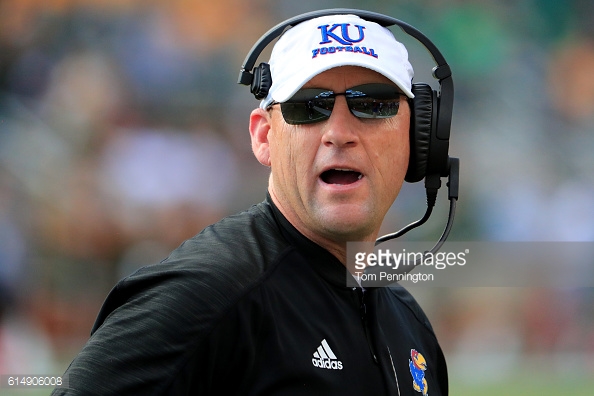 It should not come as a surprise that Likens decided to leave Lawrence. Prior to last season, Likens was stripped of playcalling and quarterback coaching duties by coach Beaty but retained the title of offensive coordinator.

Beaty announced Tuesday he had promoted Garrett Riley to quarterbacks coach, presumably meaning Beaty will continue to serve as KU’s offensive coordinator in 2017.
In a statement, Beaty praised the young coach saying, “Garrett has been a tremendous asset to our program since the day he set foot on campus. Having played under Mike Leach at Texas Tech and worked closely with his brother, Lincoln Riley, during his time at East Carolina, Garrett has had his hand in some high-powered offenses. His extensive knowledge of the Air Raid offense has been invaluable as we implemented it to our team, and I am looking forward to him having an even greater impact in his new role.”

Riley is the younger brother of Oklahoma offensive coordinator Lincoln Riley. Last season, he was an offensive analyst for KU last season. The 27-year-old played quarterback at Texas Tech from 2008-09.

His coaching career started at at NCAA Division III Augustana College in 2012 as a running backs coach. He then worked three seasons on the offensive staff at East Carolina before coming to KU.