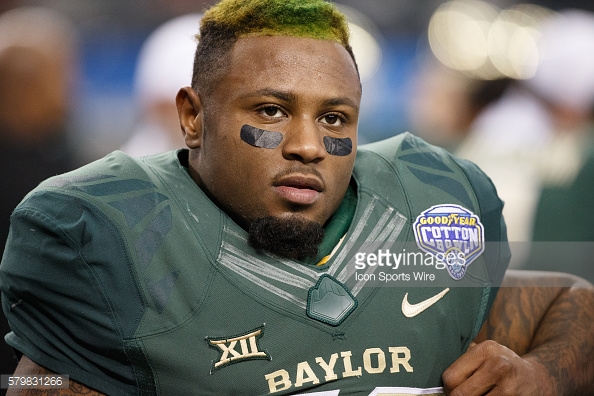 When it was announced that Baylor running back Shock Linwood planned to skip the Cactus Bowl to prepare for his NFL future, he joined Leonard Fournette and Christian McCaffrey as the latest big names to skip their respective bowl games.

Baylor head coach Jim Grobe told the Waco Tribune, “Shock wants to prepare for the next level. He wants to get ready for pro day and this will give him an opportunity to be as healthy as he can. The good thing is we’ve got two running backs in Terence Williams and JaMycal Hasty who will be ready to play.”

Linwood had an excellent career in Waco, where he became the Bears’ career rushing leader with 4,166 yards. But, he’s not LSU’s Leonard Fournette, who is skipping the Citrus Bowl, or Stanford’s Christian McCaffrey, who is not playing in the Sun Bowl.

Fournette and McCaffrey could both be first or second-round picks. Linwood’s average yards per rush dropped from 6.8 last season to 5.4 this season. Also, his season ended with a dud, carrying the ball just 8 times against Texas Tech and 6 in the season finale against West Virginia.

During halftime of the Boca Raton Bowl on Tuesday night between Western Kentucky and Memphis (yes, I was watching … yes, I’m a Bowl Game Degenerate #BGD), ESPN’s Todd McShay said, “at best, [Shock Linwood] is a 5th-round pick.”

But, regardless of the actual motivation and reason(s) behind Linwood’s decision, the discussion surrounding top players skipping bowl games is gaining momentum.

So, is it warranted?

Yes. No doubt about it.

For the record, I am against paying college athletes. I’m a free-market guy in almost every aspect of life. But, I’ve always believed paying college football and basketball players opens Pandora’s box in so many ways on college campuses, for the athletes, hanger-oners, the NCAA, and everyone else involved.

Also, the reality is that the large majority of student athletes are not even worth the cost of their scholarship. The stars are worth more, but most aren’t.

According to the College Board, the average cost of tuition and fees for the 2016–2017 school year was $33,480 at private colleges, $9,650 for state residents at public colleges, and $24,930 for out-of-state residents attending public universities.

So, to make this easy, let’s say the average football player costs a University, conservatively, $120,000-$150,000 over four or five years (since some red shirt). I estimated an average of $20,000/year in tuition + $10,000/year in room and board. Of course, this number will be higher for private universities and lower if a player stays in-state at a public university.

For every Leonard Fournette, there are at least half a dozen players who don’t come close to being worth that price to a university.

So, when a player like Leonard Fournette or Christian McCaffrey decides he’s going to sit out a fairly meaningless bowl game, I’ll support him 110%.

Fournette and McCaffrey have been stars with their respective programs and have far exceeded the value of their scholarship. So, as long at their teams are not playing in the College Football Playoff, I certainly understand their desire to sit out and protect their multi-million-dollar investment: their bodies.

Some may point to the fact that players can and often do take out insurance policies on themselves, but when you read the details of these policies, they are very confusing and maybe not as effective as they appear at first glance.

As ESPN notes in the article we linked to directly above:

The reality is, players rarely end up receiving a payout, even after they’ve sustained an injury. And when they do get paid, it’s still unclear whether the IRS has dibs on a cut of the money.

Ironically, the most recent big-name player to get hurt in his bowl game was Notre Dame linebacker Jaylon Smith, who weighed in on this controversy. Smith tore his ACL and LCL in his left knee in his final collegiate game at Notre Dame, the Fiesta Bowl against Ohio State last season.

Honestly. With Everything I’ve been through, If I could go back to Jan. 1st I’d play again. #ClearEyeView

Prior to his injury, Smith was considered a top-five draft prospect last year. He fell all the way to the Cowboys in the second round, costing him what some estimate to be around $19 million in his rookie contract. To make matters worse, the nerve damage could be career-threatening.

While I respect him for saying he’d still play in last year’s Fiesta Bowl… he’s out of his mind.

$19 million is $19 million. And when you factor in earning that kind of money at 21 years old and including compound interest, you’re talking the kind of money, if spent and invested wisely, that can last a family tree for generations to come.

It’s easy to be an armchair quarterback and criticize these young men for their decisions to not play. But, next time you see a check with your name, at least 6 zeros, and all it needs is your health and a signature… let’s see you step on the field for a corporate-sponsored bowl game that makes money for a television network and gives guys like us mindless entertainment.

It’s not happening. Nor should it.