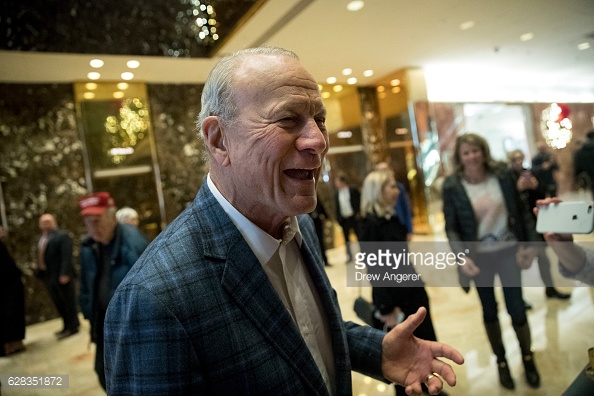 Former Oklahoma Sooners head coach Barry Switzer admitted that his “meeting” with President-elect Donald Trump at Trump Tower never actually happened, and it was all a joke to mess with the media.

Switzer told Politico he was simply in New York City with his wife and daughter and decided to enter Trump Tower. There was no meeting with Trump scheduled.

Switzer went on to say, “All the media people said, ‘Coach what are you doing here?’ I told them I was here to see the president like everyone else.”

Instead, the former Oklahoma football coach he just went upstairs in Trump Tower for a cup of coffee and came back down.

“I told the reporters I had a great visit, and that we were going to make the wishbone great again,” he said. “I told them I was going to be Secretary of Offense and that Trump knew how to run the ball down the field.”

Switzer may be the funniest guy he knows, adding, “Then I went back to my hotel and laughed my ass off. It went everywhere. Everyone believed it. I had all these calls, but I was just jerking people around.”

Switzer went on to have plenty of fun with this on Twitter.

@realDonaldTrump told me he wants to “Make the Wishbone Great Again” @OU_Football pic.twitter.com/d2VJYNUSeD

Had great interview with @realDonaldTrump being his Secretary of Offense! He plans to run the ball! Said I’m his guy! pic.twitter.com/F2g1jNxJGD

Several media outlets went and ran with the story of a meeting between Switzer and Trump.

Switzer is clearly sharp as ever at 79 years young.

Oh, and is this the kind of “fake news” the media has been losing its mind over?