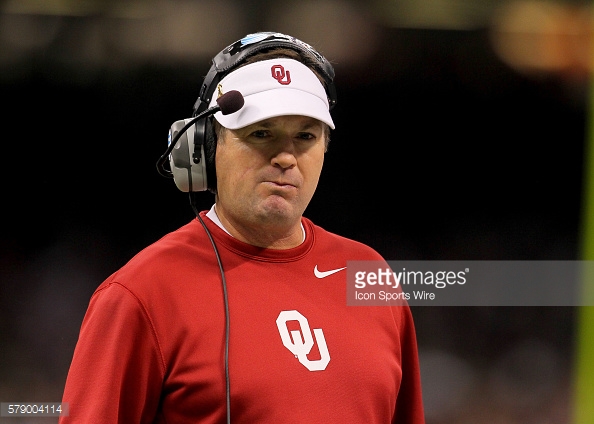 Oklahoma head coach Bob Stoops faced the media for the first time since the public release of the Joe Mixon video, and his apology comes too little too late.

Stop the bullshit, Oklahoma fans. I followed your team during my years covering the Sooners when I lived in the state. Most fans are fantastic people. But, the folks that are making excuses for OU’s decision to retain Joe Mixon don’t have a leg to stand on anymore. These are the same out-of-their-mind-fanatical-jerkoffs who have spent the past several months defending former Baylor coach Art Briles at every turn.

You have no leg to stand on anymore because even the man who runs the program, Bob Stoops, said he screwed this one up.

In his first public comments since the release of the video, Stoops said, “Two-and-a-half years later, it’s fair to say it isn’t enough. That’s positive in that that’s the way things have gone in the last two-and-a-half years, the only thing acceptable anymore is dismissal. We didn’t go that route.”

So that’s it. The debate is over. Mixon had no business being on campus and playing for the Oklahoma football team after breaking four bones in Amelia Molitor’s face, which forced her to have her jaw wired shut, and was followed by limited to no feeling on the left side of her face for six months.

Granted, it’s sad this outrage is only coming after the public release of the video. But, similar to Ray Rice, something touches us on a different, more human level, when we see an incident with our own two eyes, rather than just reading the details in a newspaper or online.

Of course, don’t forget, the Oklahoma administration, from President David Boren, to AD Joe Castiglione, and Stoops, all saw that video with their own two eyes. Yet, they found justification in keeping Mixon.

I know what’s coming: I’m a “national media hack”, “liberal pundit”, “dishonest journalist”. Yep, the same guy who admittedly voted for Donald Trump and hosts radio shows on Fox News and has lived in the rural/oil town of Woodward, Oklahoma (population: 12,000, the largest town for an hour in any direction), is a “national media liberal pundit dishonest journalist hack.” That one doesn’t work here.

Quick side note: For the record, this is why you come to this website. We are not beholden to local sponsors or advertisers who might be seeing things through crimson and cream glasses, or through other more PC national media outlets who don’t really want to dig into this in the manner it deserves.

Now, Stoops does not get to totally skate here. He did backtrack a bit when he said, “If I’m at fault, it’s hard to give up on these young men that I go in their homes and talk to their families and talk about their opportunities to grow at Oklahoma. For those that find that unacceptable, I apologize to those people.”

What coach Stoops did with that sentence was try to create some sympathy for himself and Mixon. But, there is simply zero sympathy to be had. Was there wrong on the end of Amelia Molitor? Yes. Did it deserve or elicit Mixon’s response? No.

The racial slur from Molitor and the alleged spit have been debunked.

But, if I were a father with a daughter at the University of Oklahoma and was paying tens of thousands of dollars a year to have my child on campus, I’d be furious. Furious two and a half years ago, and furious today. That has not changed.

Stoops went on to say, “But I feel like Joe has moved ahead in a very positive way and believe he’s really grown and matured from it.”

Really? By “matured from it” does he mean Mixon hasn’t knocked out any women since that incident? Wow! What a guy!

Mixon was suspended this season for being a jerk to a parking attendant. And, when he came back last season, he didn’t appear to have a ton of remorse. But, why would he? All he had to do was go to class, work out, and he’d be back on the field in a year.

Fuel to his fire? Motivation from his haters?! He broke a woman’s face!! Most people hate that kind of action, regardless of your status in life.

This was a football decision, and the kind of one that Bob Stoops has become more desperate to make in recent years.

Despite his incredible success in Norman, Stoops has built the program to the point where it’s “National Championship or bust”. Even Big 12 titles are just viewed as “par for the course” by most Oklahoma fans. As a result, has the head coach possibly taken more chances with high-risk players than he should have? Clearly, he has.

OU fans will point to strong stances Stoops has taken with former players. But there are holes in every one of them.

He was dismissed from the team in August of 2006 when it was reported that he was paid for work at Big Red Sports and Imports, a car dealership owned by a major University of Oklahoma donor, but that he did not complete the work, a violation of NCAA rules.

Tough stance? Hardly. Nothing destroys a program more than these kind of NCAA violations. Stoops had to get rid of Bomar ASAP or risk NCAA involvement.

Also, his alleged assault was of another man. There’s still a big difference between that and Mixon’s case with Molitor. If you don’t understand that difference, just stop reading (although you’ve probably already stopped reading a long time ago).

He was dismissed late in the 2013 season for a “violation of team rules”. For the record, it was his second suspension of the season. Also, he was a senior, the Sooners weren’t in a national title hunt, so it didn’t exactly take stones to kick him off the team at that point. Oh, also, Williams was not even the team’s leading rusher, Brennan Clay was.

He was dismissed from the team in 2013 following two felony counts of indecent exposure. Metoyer was five-star recruit who came to Norman and was a total dud his freshman year. Metoyer didn’t come close to living up to expectations, finishing with 17 catches for 148 yards his first season (which was preceded by a year in prep school). At the time of his suspension he had just 2 catches on the season (mid-October). This move didn’t take guts.

He was dismissed from the team for a violation of team rules earlier this season. But, the junior had struggled through his tenure, moving from the offensive side of the ball to the defensive side. He was already a junior who was hurt and was likely to miss the rest of the season during the time of his dismissal.

Then, there was Mixon. He was just starting his career with OU, and was one of the biggest recruiting gets in recent years by Bob Stoops. Mixon was the nation’s No. 1 all-purpose back, according to Rivals. He chose the Sooners over UCLA, Wisconsin and California.

You think a back-up linebacker or third-string cornerback would’ve received the same treatment as Mixon? Hell no.

Stoops could have been nervous that Mixon ends up at another Big 12 school and terrorizes his Sooners for years to come. More likely, he just didn’t want to lose this kind of talent after the amount of work he and his staff put into recruiting the top running back in America.

If anything, the Sooners did Mixon a favor. Instead of having to play the required 3 years, which he would have done his freshman year, because he is so talented, he got one year off. That has possibly saved his body hundreds of carries. In today’s NFL, where running backs are useless by their late 20s and teams are weary of backs who were overworked in college, Mixon is relatively fresh.

Now, does Mixon decide to go to the NFL after the Sugar Bowl next month? My hunch says yes. I don’t see how both sides can deal with this for another year.

The more intriguing question: does Mixon get drafted?

I don’t know. But thankfully, Bob Stoops is not an NFL GM.