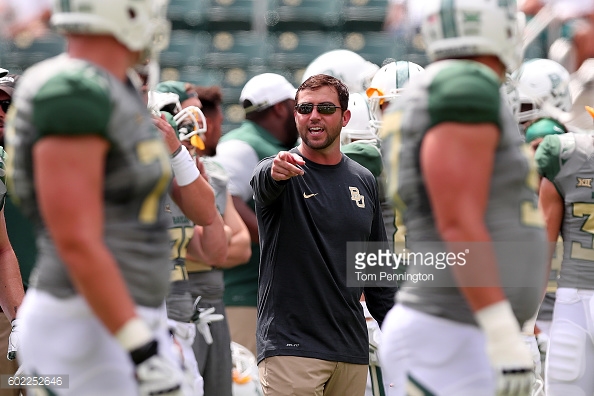 Kiffin confirmed the hire to Fox Sports and texted the outlet, writing “Home run” in a text message.

Briles joined his father, Art, on the Baylor staff in 2008 as an offensive recruiting coordinator and worked his way up to offensive coordinator, replacing Phil Montgomery in that role in 2015.

He was a 2015 finalist for the Broyles Award, given annually to the nation’s top college football assistant coach. In 2015, Baylor led the Big 12 in points per game, total offense, and rushing yards per game. They were 5th in the conference in passing yards per game.

With all the turmoil around the program this season, Baylor ended the year losing 6 straight games. The Bears were 4th in the Big 12 in points per game, 3rd in total offense, 5th in passing offense, and 1st in rushing offense.

Briles expected starting quarterback next season is junior college transfer De’Andre Johnson, a former highly-rated recruit who was kicked out of Florida State before his career started after he was caught on video punching a woman at a bar. In 11 games with East Mississippi Community College, Johnson threw for 2,646 yards and 26 touchdowns with six interceptions.