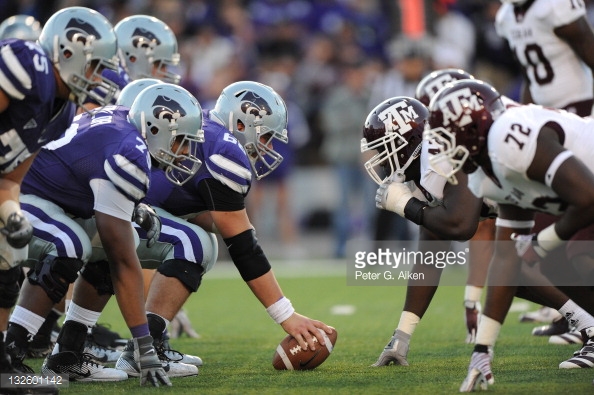 Two former Big 12 foes, Kansas State and Texas A&M, will trade blows once again as they meet up in the Advocare V100 Texas Bowl 8 p.m. Wednesday at NRG Stadium In Houston.

Kansas State and Texas A&M are familiar foes and have a history when playing each other. Perhaps, the most famous meeting came in the 1998 Big 12 Championship Game where Texas A&M came from behind to upset a previously unbeaten Kansas State team. That game shattered the Wildcats’ National Championship and BCS hopes. Adding to the misery of this game is the fact Kansas State has not defeated an SEC opponent since the 2001 Cotton Bowl, when the No.11 Wildcats took down No.21 Tennessee 35-21.

Texas A&M fans might be licking their lips at this history, but the Aggies are currently on a 3-game losing streak to Kansas State and have allowed at least 40 points in each of those past three affairs. Granted, Kevin Sumlin was not the coach of A&M in any of those three match ups. But, if there is one weakness Sumlin has, it does come when he places on the headset.

Sumlin is a master recruiter with his “Swagcopter” and the ability to reel in five-star talent. His offensive schemes have helped to produce Heisman Trophy winner Johnny Manziel and produce NFL talent such as current Tampa Bay wide receiver Mike Evans. Look on the opposite sideline though, and Bill Snyder can take a team with five times less talent and still find a way to capture victory. When Kansas State lost in that 1998 Big 12 Championship Game, they were the No.1 team in the nation. This ranking coming just 9 years after Sports Illustrated named Kansas State “Futility U” after two consecutive winless seasons.

Texas A&M has former Oklahoma quarterback Trevor Knight, who had a stellar senior year leading the Aggies to a 6-0 start before being dispatched in a road game against No.1 Alabama. He will look to find receiver Josh Reynolds, whose compiled 885 yards and 10 touchdowns. Also in the arsenal is running back Trayveon Williams, who will enter the bowl game with 1,024 rushing yards and eight touchdowns on 147 attempts. Williams is averaging seven yards per carry.

While Knight will have plenty of talented skill players around him, his offensive line will have the tough task of keeping Kansas State defensive end Jordan Willis off him. Willis leads the Big 12 Conference with 11 solo sacks and assisted on another sack. Add in Reggie Walker, who is in the top five in the conference with 6.5 sacks, and that’s a dangerous combination. If the Aggies can manage to keep Willis and Walker out of the backfield, they’ll have to figure out how to get past linebacker Elijah Lee next. Lee ranks fifth in the Big 12 in tackles with 98 tackles, including 67 solo. Kansas State is the No.1 defense in the Big 12 when it comes to scoring. This could present a problem for the Aggies as they only eclipsed the 30-point mark twice in their final six games. One of those times was during a 52-10 victory against New Mexico State, who will be kicked out of the Sun Belt Conference next season.

If the defense wasn’t a problem enough, Kansas State is well known for their tremendous play on special teams. Byron Pringle leads the Big 12 in kick returns. The Wildcats also rank third in kickoff coverage in the Big 12.

The two teams haven’t faced each other since 2011 when Kansas State scored a 53-50 victory in four overtimes. Texas A&M ran off to the Southeastern Conference the following year. The series renews 8 p.m. Wednesday in Houston.