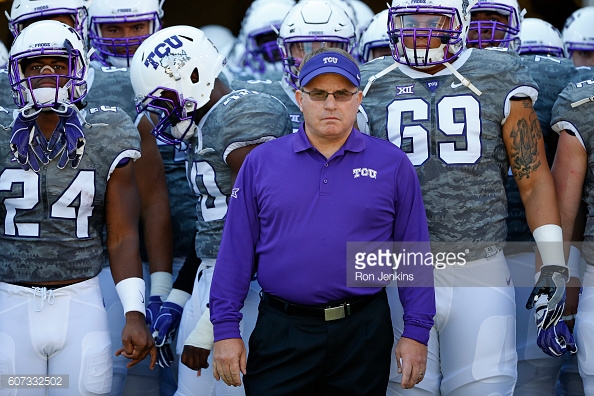 The TCU Horned Frogs lost to the Georgia Bulldogs 31-23 in the AutoZone Liberty Bowl on Friday, and with 2016 in the books, Gary Patterson can’t be content with where the program stands.

When TCU joined the Big 12 conference, it put to rest nearly two decades of frustration following the break up of the Southwest Conference and a move to the “minor leagues” in the WAC, Conference-USA, and Mountain West. Then in 2012, under loyal head coach Gary Patterson, who had turned down bigger and better jobs, TCU was once again ready for the big time in the Big 12.

But, following the Horned Frogs 31-23 loss to Georgia in the Liberty Bowl on Friday, TCU wrapped up a 6-7 season, while going 4-5 in Big 12 play. The game was marred by mistakes, including quarterback Kenny Hill, who was stripped for a fumble near the end of the half, and to start the second half a great kickoff return was butchered by a Kyle Hicks fumble on the first play.

This closes five seasons for TCU in the Big 12 conference:

When factoring in that TCU was picked to finish second in the Big 12 preseason poll, even earning two first place votes, this season is even more of a let down. Hell, ESPN’s Kirk Herbstreit picked TCU as one of his participants in the College Football Playoff.

When we look back on TCU’s run in the Big 12, where do is the credit due? Gary Patterson or Trevone Boykin? Sure, Patterson is a great head coach. But, the two years where Boykin became one of the best quarterbacks in America were the best for the Horned Frogs.

Some might have wanted to give that credit to co-offensive coordinators Doug Meacham and Sonny Cumbie. But, their star(s) took a bit of a hit this season with the average and often sloppy play of quarterback Kenny Hill and mediocre team stats. TCU was ranked 7th in scoring offense and total offense this season, while ranking 5th in passing offense.

In 2012 and 2013, Boykin split time with Casey Pachall. Boykin never looked to be all that special of a player, throwing 22 touchdowns to 17 interceptions over his first two season. But, we all know what happened his final two years in Fort Worth when Cumbie and Meacham came on board: 64 touchdowns, 20 interceptions, and a Heisman finalist trip to New York City.

Granted, those TCU teams of 2014 and 2015 has very solid defenses. In 2014, the team was ranked 1st in total defense, while last year, the Horned Frogs were 4th in the conference in that category.

But, TCU was also 4th in the conference this year in total defense. The unit got off to a rough start this season, before closing relatively strong. The good news is TCU returns many of their key defensive players in 2017: Travin Howard, Ty Summers, Nick Orr, and Niko Small all return. The losses of Aaron Curry and Josh Carraway will hurt, but the Horned Frogs will be OK.

The reality is this: in the Big 12, you need a quarterback.

The questions remain on offense, where Kenny Hill is just not the answer. He should have to win the job back in the spring, going into a full-blown competition with Foster Sawyer and stud freshman Shawn Robinson, who will be enrolling in January.

Overall, TCU’s venture into the Big 12 has been a very positive one. But, even with a strong defense, no team in the Big 12 is complete without a quarterback. Just ask Texas. On the other side, ask Oklahoma or Oklahoma State.

Well, yes, technically, rare. Gary Patterson has just 3 losing seasons since taking over in 2001. But, two of those three losing season are in the last 4 years. If you just count conference play, TCU has 3 losing seasons in the past 5 years.

Don’t get me wrong, Gary Patterson is a helluva coach and he’s not going anywhere, nor should he. But, after a very disappointing 2016 season, by anyone’s standards, the Horned Frogs need a solid turnaround in 2017.

They don’t need to go win the Big 12, but back into the upper echelon of competitiveness in the conference should not be out of the question. And, under Gary Patterson, it should be expected.

2016 Alamo Bowl Preview: Oklahoma State vs. Colorado
One goal for every Big 12 team heading into 2017
To Top