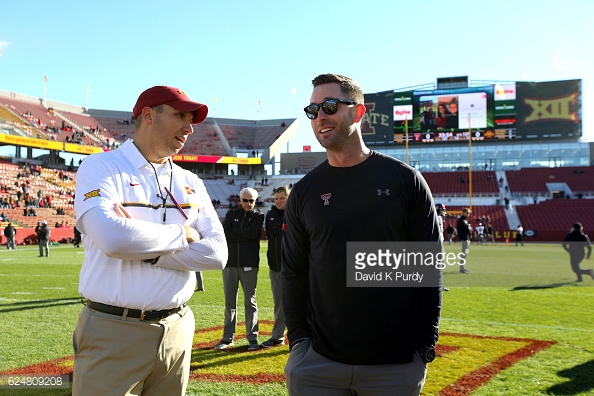 As the calendar flips to 2017 this weekend, what better way to ring in the New Year than to turn over a new leaf and set new goals. We went ahead and picked one goal for each Big 12 football team as they get ready for next season.

Try and haul in a decent recruiting class. New head coach Matt Rhule has his hands full with just 5+ weeks left to lock up some semblance of a 2017 recruiting class. After last year’s class was gutted because of the sexual assault scandal, having two very weak classes in a row can kill a program. I believe Rhule is going end up doing a great job at Baylor. But, he’s got his hands full right off the bat.

Flip close losses into close wins. Iowa State won two of its final three games this season. But, there were also a few games where they came up just short in that they could have won. The Cyclones lost four games by a touchdown or less. If Iowa State can change the outcome of a couple of those games, Matt Campbell will have his team bowling in the very near future.

Win TWO Big 12 games. The last time this happened for the Jayhawks, Joe the Plumber was taking the country by storm, Barack Obama had yet to get into office and make a bad situation worse and I was still three years away from my first “smart phone”.  Feels like a lifetime ago. In many respects it was. Now, I can’t tell you where the two Kansas wins come from in a round-robin schedule and a conference with quality depth… but hey, I’m just giving you the goals, not the answers for how to get there!

Finally address and assess what’s going on with Bill Snyder. His contract runs through 2017. He’ll be 78 years old next season. He clearly still has the stamina to do it, but does he want to? Who might be his successor? The longer this speculation goes on without any clear answers, the more fodder it gives to talk radio, message boards, and columns like this.

Don’t recruit any domestic abusers…. I kid. Sort of.

Oklahoma’s goal should be to do everything in its power to keep Lincoln Riley as offensive coordinator. The Oklahoman’s Berry Tramel wrote a good piece about how Lincoln Riley could be Bob Stoops’ successor. That would be an ideal scenario for OU, even if it’s years away from happening.

I think an “offer that he can’t refuse” will come Riley’s way before then. But, hopefully I’m wrong. Riley got a $400,000 raise last offseason. Is another one in store this summer? If needed, sure.

Win the Big 12 in 2017. Mason Rudolph and James Washington announced they’re coming back. The offensive line should get even better and Justice Hill returns in the backfield. The weapons are all there and if the defense can continue to create turnovers, this team will give the Sooners all they can handle at the top of the Big 12 conference.

Move on from Kenny Hill. I can’t wait to see what true freshman QB Shawn Robinson is capable of. Kenny Hill is too turnover prone and pads his stats against weaker competition. He’s not the kind of quarterback that will lead the Horned Frogs back near the top of the Big 12 conference. With a lot of solid players returning next year, especially on defense, the spring should be an open competition between Hill, Robinson, and Foster Sawyer.

Prove you’re the class of Texas. Baylor has its issues right now. TCU has taken a step back. Texas Tech can’t get over the Mike Leach hump. And Kevin Sumlin fan base is dwindling by the day at Texas A&M. Now, under new head coach Tom Herman, is the time for Texas to regain control as the preeminent college football team and program in the Lone Star State.

Find a defense? Although this would’ve been a goal for the Red Raiders any of the previous seasons under Kliff Kingsbury. Young pieces should grow for this past season and there are a slew of pretty good defensive recruits coming in in 2017. If Kingsbury can’t make that side of the ball respectable next fall, he’s finally going to be on the hotseat.

Build off 2016’s 10-win season. That doesn’t mean WVU has to win 10 games again. Although they certainly can. But, what can’t happen is a step back to a 6 or 7-win season. Now, I don’t think that’ll happen with Will Grier stepping in at quarterback. But, as much good will as Dana Holgorsen earned this season can quickly go away if the Mountaineers don’t meet expectations in 2017.