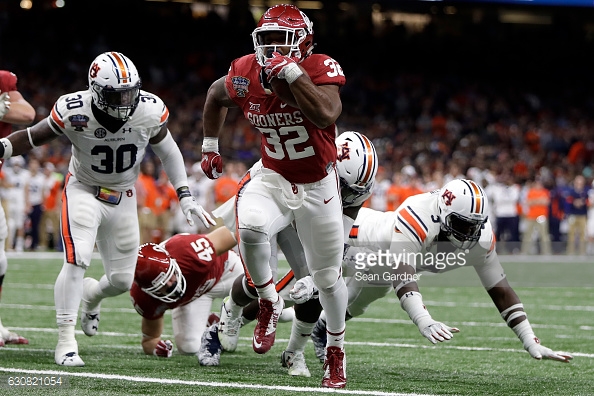 With 86 rushing yards in a 35-19 win over Auburn in the Sugar Bowl, running back Samaje Perine broke Billy Sims all-time rushing record at Oklahoma.

Perine is only a junior, but it’s expected he’ll declare for the NFL Draft before the January 16 deadline.

Congrats to a true sooner @Samaj32 with hustle and heart. #BOOMER#theNewRbU#SugarBowl2017

So, here is an update to the list after the Sugar Bowl:

Perine finished the game with 86 yards on 17 carries, along with a touchdown. His teammate, Joe Mixon, led the team in rushing yards with 91 on 19 carries and a pair of scores.

Head coach Bob Stoops gave a shoutout to Perine in the locker room after the game:

Everybody in the room gets a game ?… but one special one for the new OU career rushing leader. pic.twitter.com/7QBQQx6rcQ

Let’s not forget that 10% of Perine”s career output at OU came in a single game: his freshman year against Kansas in 2014 when he set the FBS record with 427 rushing yards against the Jayhawks.