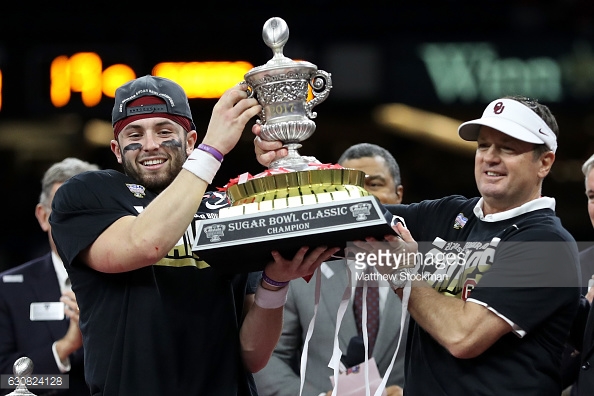 It was an impressive run at an unexpected, but very opportune time for the Big 12 conference. The Big 12 has basically been out of the College Football Playoff running for two months. Oklahoma lost two of its first three games and was considered out by late September. Baylor got off to a 6-0 start, but most fans with limited knowledge knew the Bears were frauds who were not going to finish 12-0. Then, there were the West Virginia Mountaineers, who hung on the longest to an undefeated record, before losing at Oklahoma State 37-20 on October 29th.

The media only doubled-down on their cult-like obsession with the SEC and the Big 10, while the ACC got its love at the top for Clemson, Lamar Jackson and Louisville, along with Florida State. Then, the Pac-12 crept into the picture thanks to Washington. But, the Big 12 was left with its junk in its hand wondering where it all went wrong?

Similar to the election cycle, coastal media bias rarely cares about the “heartland” and the “fly over states”. They’re there, but no one really pays ’em any attention. So, if the media can push aside the Big 12, they’re happy to. If Texas or Oklahoma aren’t carrying the conference’s water, the Big 12 is irrelevant (just ask TCU and Baylor in 2014).

Kansas State linebacker Elijah Lee thanks God after the Wildcats moved closer to their 33-28 win over Texas A&M.

But, the bowl season is always a chance for a conference to prove its worth against other conferences. Sure, there are factors like motivation that can come into play a skew an outcome of a game. But, if nothing else, it’s a good barometer.

And with the 2016-17 bowl season in the books (outside of the National Championship), the Big 12 can hold its head high finishing with a 4-2 record.

Not only was the record good, but the competition was stiff. Two of the wins were against the SEC West (yes, that mighty, impenetrable SEC West). Oklahoma rolled the second-best SEC West team in Auburn, and Kansas State, who finished middle of the pack in the Big 12, had little trouble with Texas A&M.

Meantime, Oklahoma State ripped Colorado, a Buffaloes team that won the Pac-12 South and was ranked in the Top 10.

Then, there was Baylor, who was getting smoked by every Big 12 team down the stretch, went out and beat up Boise State, one of the best of the Group of 5.

In the losses, Georgia had to come back to beat TCU and West Virginia… well, I don’t know what to say about the Mountaineers’ loss to Miami. Their bowl performance, coming off a 10-win season, was more than just disappointing, especially considering they were playing an old Big East rival in the quality recruiting grounds of Florida.

But, back to the good stuff.

Not only did the Big 12 prove its worth on the national stage, it proved the conference isn’t a joke on the defensive side of the ball. Yep, the offenses might just be that good.

How is that possible?! The Big 12 plays NO DEFENSE!! That’s what we’ve been told for years. Oh, so you mean we shouldn’t believe everything we hear from a talking head in New York, Los Angeles, or Bristol.

And, as for the mighty SEC, who has proven to be nothing more than Alabama and everyone else, the conference is currently 6-6 in bowl games. One of those wins is barely over a MAC team (Mississippi State beat Miami (OH) 17-16), and two are over Big Ten teams (Iowa, Nebraska).

Oh, and Bob Stoops owns the SEC. Did we mention that yet?

Bob Stoops will move to 4-0 against the SEC since calling the SEC’s aura of invincibility “propaganda” four years ago.

Now, onto the sham that is the Big Ten. We’ve been sold a bill of goods with this conference. ESPN and Fox are so desperate to recreate the Bo vs. Woody rivalry in Harbaugh vs. Meyer, they’ve lost all objectivity in framing how good the conference is. Both these teams turned out to be overrated. Ohio State totally crapped themselves in a College Football Playoff they had no business being in (yes, it should’ve been Penn State, and I said as much on December 3rd). And Michigan also was a bit of a fraud, needing to come back late against Florida State to make it a game in the Orange Bowl.

The Big Ten finished its bowl season with a 3-7 record. The apologists will say that in many cases, the Big Ten is playing road games because most of the bowl sites are in warm weather locations. That’s ridiculous. Every team that plays in a bowl game get 2-4 weeks off, has ample time to rest and prepare, and half these bowl games are EMPTY anyway! As for “road game atmospheres”, does that explain Penn State blowing a two-touchdown lead in the 4th quarter of the Rose Bowl? Please.

So, between the Big Ten and SEC, the two supposed “best conferences in America”, they went a combined 9-13 in bowl games.

Could it be a coincidence and just one fluky year? Yes, it could.

Or maybe, just like during election cycles and seasons, the folks in the middle of the country are being ignored and disrespected. But, hey, what else is new?