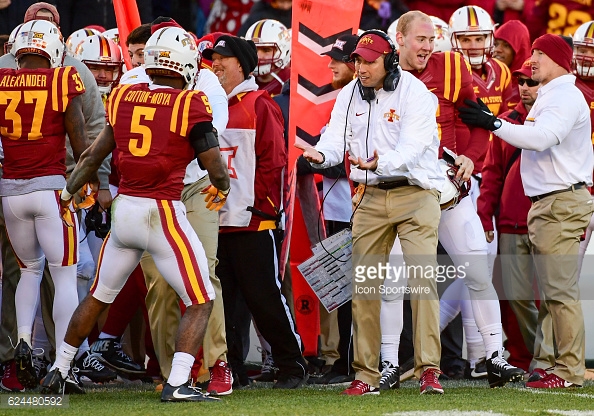 Iowa State head coach Matt Campbell addressed the rumors of a possible transfer by safety Kamari Cotton-Moya. But, why are those rumors even happening?

Ever since Paul Rhoads was fired following the 2015  season, the rumors have floated around whether or not safety Kamari Cotton-Moya would be leaving the Cyclones program.

Nine months ago Cotton-Moya addressed this issue and said it was a non-story.

Cotton-Moya on transfer rumors: “I didn’t entertain it at all. A lot of things happened last year that is in the past.” #Cyclones

Well, following a disappointing 3-9 season, those rumors have once again started surfacing.

Head coach Matt Campbell told the Des Moines Register that he’s heard the rumors, but “I expect Kamari back.”

Campbell went on to say, “Our ticket for success is guys that are all in and about growth and about continuing to do what we do. I think Kamari is one of those guys. He always has been. I don’t see much of that. I know there’s been a lot played out there and different things from that.”

But, if Cotton-Moya, who was voted team captain prior to the 2016 season, is really as much of a leader as Campbell thinks he is, he owes it to his teammates to stay in Ames.

In 2016, Cotton-Moya ranked third on the team with 73 total tackles, led the team in solo tackles, and also had two interceptions and one forced fumble and a fumble recovery. He’s been a very productive player for Iowa State over his 3 seasons as a starter, but injuries have nagged him throughout his career, most recently undergoing surgery to clean scar tissue in his shoulder last month.

But, when a player is going to transfer for his final season, there really should only be two reasons that are considered.

This is obviously a non-issue. He is a team captain, leader and multi-year starter. There is no where in America he could go where he would he would get more playing time against better competition than what he sees now week in, week out in the Big 12 conference.

Well, according to draft predictions I’ve seen, he’s ranked as the #22 free safety for the 2018 draft. When factoring in his history of injuries, there’s a possibility he may not even get drafted next spring. And if he doesn’t get drafted, it won’t be because he played at Iowa State.

Nowadays we see FCS players get drafted #2 overall! (Carson Wentz, Eagles). There have been several Iowa State players drafted in recent years on both sides of the ball. Linebacker A.J. Klein has put together a nice career with the Panthers, while offensive tackle Kelechi Osemele is a stud on the offensive line for the Raiders, signing a $60 million deal in the offseason. Iowa State is not the reason a player won’t get drafted.

Now, there is a wild card here: winning?

If that’s Cotton-Moya’s excuse, it’s a lame one. Transferring to a top tier Power 5 program to be a less influential player, but to have a chance at 9 or 10 wins, is short sighted.

Cotton-Moya has a chance to go down as a great Iowa State player, the kind of guy that can return to Ames at anytime and be treated like gold. It doesn’t matter that he might play on 4 below-average teams. Loyalty is rewarded by college football towns. As a four-year starter, Kamari Cotton-Moya would be treated as such.

Plus, when you look at some of the players Iowa State brings back, including freshmen David Montgomery, JaQuan Bailey, Deshaunte Jones and Kene Nwangwu, there is plenty of promise for 2017.

No, I’m not predicting Iowa State to compete for a Big 12 title. But, a bowl game? Sure. Add onto that QB Jacob Park, who has a year in Ames under his belt, and the return of stud offensive lineman Jake Campos, who broke his leg before the 2016 season, but will play in 2017, and there are reasons to be excited.

Wouldn’t it be more satisfying for Cotton-Moya, who has suffered through seasons of 3-9, 2-10, and 3-9 to help this team reach his first bowl game in his senior year, than latching on somewhere and following others? Similarly, it’s why I don’t believe Kevin Durant will get nearly as much satisfaction when, or if, he wins a title with the Warriors, as he would have with the Thunder.

Often times, the grass isn’t always greener on the other side.

But, will Iowa State’s Kamari Cotton-Moya realize that before it’s too late? We’ll see.