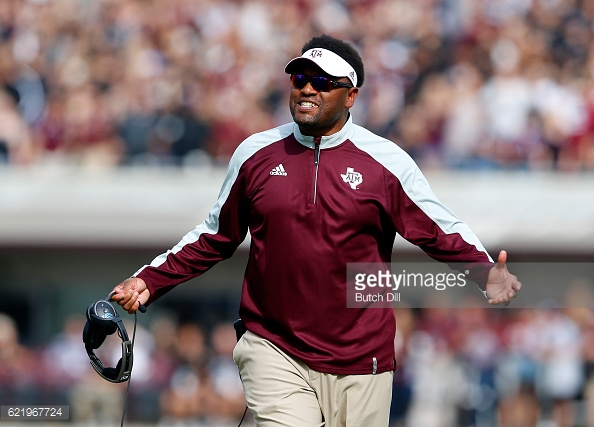 The SEC is supposedly this mighty conference that should be worshiped and glorified as the cream of the crop in college football.

There is only one person, and maybe one fan base, who should be worshiping the SEC right now: Texas A&M head coach Kevin Sumlin. Depending on how much the A&M fan base is content with mediocre bowl games, or actually fighting for a chance to play in a New Year’s Six bowl, Texas A&M can be happy too.

The SEC seems to have saved Sumlin’s job.

At the beginning of the year, Sumlin was on one of the hottest seats in college football. It was rumored the Aggies would try to scoop up Tom Herman from Houston if he didn’t compete to the level A&M wanted its team to.

We have to give Sumlin some credit. The Aggies started 7-1 with their only loss coming on the road against defending National Champion Alabama. In fact, A&M even held a 14-13 lead early in the ball game. However, three of those seven victories came against non-conference teams. The first victory came against an UCLA team who finished 4-8. The second victory was a 67-0 shellacking of Prairie View A&M.

The third non-conference victory came October 29 during a 52-10 domination of New Mexico State, a team who is being kicked out of the lowly Sun Belt Conference.

Moving on to the four SEC victories, which all came prior to their loss at Alabama, where the Aggies defeated four teams who participated in bowl games this season. This is where the SEC is literally saving Sumlin’s job.

Many people blame the SEC East for the conference’s downfall from top-to-bottom. After all, Kentucky nearly made an appearance in the SEC Championship, and Vanderbilt scored a bowl berth. The problem with this theory is that A&M only scored two victories over the SEC East schools. A&M defeated South Carolina, who lost the Birmingham Bowl to Group of Five school South Florida, on the road 24-13. Some may call that a good game between top-notch SEC defenses. Those people either work in Bristol, Conn. or live in SEC territory. Looking at the bowl statistics, the Big 12 Conference has the best defenses in the nation. A&M also took down Tennessee 45-38 in College Station. We must give the Volunteers some credit. They won the Music City Bowl against Nebraska.

A&M finished with an SEC record of 4-4. That means the Aggies managed to score two victories over SEC West opponents. Well, Ole Miss and Mississippi State both finished the regular season 5-7. You would assume those victories came against the schools who could not garner a winning record. The 12th Man actually lost both games against those two schools. A&M also got slaughtered 54-39 to an LSU team who fired its head coach in September. LSU eclipsed the 30-point mark only six times this season. Other than the A&M game, the Tigers eclipsed the 40-point mark just twice. It was an absolutely awful appearance in Aggieland for Sumlin and his staff.

So, who did A&M beat? Well, they took down the team who finished second in the SEC West. Texas A&M went into “The Jungle” and defeated Auburn convincingly 29-16. Auburn was recently embarrassed 35-19 in the Sugar Bowl by an Oklahoma team who lost to Houston. This pretty much provides the evidence that Houston could have easily beaten Texas A&M this season.

Texas A&M then went on to humiliate Arkansas 45-24 at AT&T Stadium in Arlington, Texas. Well, what seemed like a signature victory sure gets a buzz kill when you see that Virginia Tech, of what was supposedly a terrible ACC, came from behind to score 35 unanswered points against the Razorbacks. Bret Bielema’s team finished the regular season with a 7-5 record and he’s now on the hot seat.

Oh, but A&M’s eighth victory came in a hard-fought barn-burner. The Aggies managed to defend Kyle Field, where they have buried dogs named Reveille in which the student body worships, 23-10 over UTSA. Who? Oh, that school who decided to sponsor football in 2009 and brought Larry Coker’s career back from the dead.

Needless to say, A&M is not bowl eligible if it plays a 9-game conference schedule against Big 12 schools. The Longhorns are better. Texas Tech is better. Baylor could beat this Aggie team. Even former Aggie Kenny Hill might not throw an interception against this team while leading TCU to a victory. At best, A&M is the sixth best school in Texas. I understand SMU will be hollering about their upset over Houston. I suspect 9-out-of-10 times, A&M beats SMU. Then again, UTSA nearly upset the Aggies in College Station.

Hell, Trevor Knight saved his NFL hopes by transferring from the Big 12 Conference to the SEC. Knight lost his job to a Texas Tech walk-on named Baker Mayfield. His best statistics of his career came while playing at A&M, a school which burned bridges with five-star quarterback Kyler Murray. Knight’s touchdown-to-interception ratio at Oklahoma was 25-19. That’s egregious for the signal caller of a national championship caliber program. While playing this season in the SEC, Knight’s ratio saw a dramatic improvement. With a 19-7 ratio, Knight throws more than twice as many touchdowns as he does interceptions. Please, tell me more about how “amazing” these SEC defenses are.

By the way, guess who was the starting quarterback for the Sooners in 2013 during their 45-31 humbling of Alabama. That would be Trevor Knight, who tossed four touchdowns and racked up 348 yards against what is supposedly this “dynasty” of a program. Bob Stoops called the SEC hype “propaganda” that season and proved it with the victory. C’mon, the Disney Corporation owns the SEC Network, and Disney is perhaps the greatest public relations firm in the world.

What’s worse for Sumlin? Last May, the No.1 quarterback in the nation decommitted from the Aggies. The father of Las Vegas Bishop Gorman quarterback Tate Martell told Rivals.com that his decommitment was the result of hiring Noel Mazzone as offensive coordinator. Martell received an earful from the 12th Man which resulted in him posting a tweet on May 5.

“The fact that “grown-ups” are tweeting disrespectful things to my sister because of MY decision to decommit is really sad…. GROW UP!”

Oh, but it didn’t stop there. Shortly after Martell decommitted, A&M wide receivers coach Aaron Moorehead threw out multiple tweets taking shots at the generation Martell is a part of. Crosby wide receiver Mannie Netherly, who has signed and will enroll early at LSU, decommitted while calling out coach Moorehead.

On a screenshotted note from his phone, Netherly tweeted, “After tonight I see what kind of person my “future coach” is & I myself don’t wanna play for someone like that so without further ado I would like to announce that I am decommiting from Texas A&M.”

As if this PR nightmare wasn’t already bad, this summer Sumlin had to suspend coaches Jim Turner and Jeff Brooks after they performed what was supposed to be an attempt at humor, but essentially became sexual harassment at a women’s football clinic.

Despite all of the public image flubs, recruiting flops and struggles to take A&M to the next level, Kevin Sumlin is somehow still the head man at Texas A&M. The SEC is literally keeping him employed with bowl appearances in each season he’s been there. A&M doesn’t play tough non-conference games.

A&M is a mediocre football program at best. If they were in the Big 12 Conference, they would be shown as the phonies they are. But hey, at least the Aggies will continue going to mediocre bowl games in the foreseeable future because that’s better than what they had the previous decade with Mike Sherman and Dennis Franchione taking them to four losing seasons between 2003-09.

Essentially, the move to the SEC was the best thing Texas A&M has done since winning the Big 12 Conference in upset fashion in 1998.