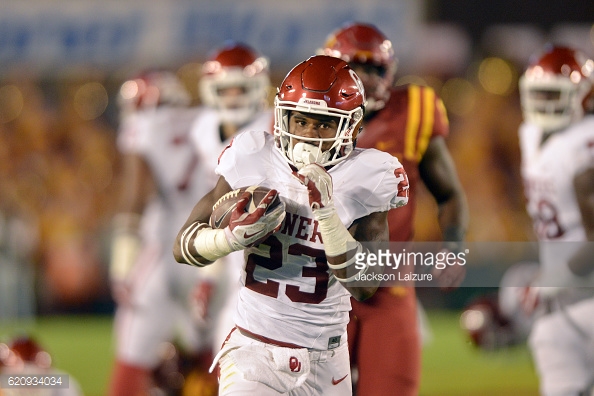 Oklahoma Sooners fans are suddenly worried about their chances of success in 2017.

The NFL draft has come down to swoop up both stud rushers Samaje Perine and Joe Mixon. The classic one-two punch that led defenses scratching their heads and gave the Sooners’ air raid attack a balanced look will be no more in 2017.

Now fans are fearful that a 2017 season which seems destined to be another playoff appearance for the Oklahoma, will all but wither up and die. I say to Oklahoma fans however, there is nothing to fear. There is no question Perine and Mixon are both special athletes and rushers and there may never be a better backfield in Norman again as stout as that duo. Now that those two have gotten their due; name a time which the Sooners didn’t have a fantastic rusher in the backfield in the Stoops era. You can’t name one, because Oklahoma doesn’t rebuild that position, they reload. Oh, how people forget. What happened when the Sooners had to replace Griffin, Peterson, Murray, Whaley, Williams/Clay/Finch?

The Sooners are deep at the position now as it is, so deep, in fact, that Dimitri Flowers who has proven to be a stout runner in his own right was switched to fullback, and is producing at that spot. Rodney Anderson, and Abdul Adams are both very talented athletes and either one of those guys could become the next great Sooner back.

Sooner Squad ’17 has three incoming studs to boot: top-rated JUCO back Marcelias Sutton, and one of the best backs in country in Trey Sermon, not to mention the Texas four-star Kennedy Brooks. Oklahoma is stacked at the position, and recruited like they had a hunch for more than a year that both Perine and Mixon would bid their farewells and enter the NFL Draft. Individually, each back has shown serious flashes of greatness at the levels of play they were previously on. Let’s start with Abdul Adams, who rushed for 1,499 yards had 11 rushing touchdowns in his senior year of high school. Adams also showed versatility in the passing attack where he had 197 receiving yards and 5 more scores. For the Sooners this season, Adams on limited touches did average 5.3 YPC on his 53 carries for 283 yards. He did seem a bit out of shape on his long run against Kansas, where he outran the pack of defenders, but came up short as the defenders closed the gap after a 57 yard run.

These kinds of things will improve over time, as Adams was just a true freshman. He will be bigger, faster and stronger in 2017. He started the season 5th on the depth chart, but after injuries to Anderson and the retirement of Daniel Brooks was thrust up to 3rd string, getting him some unexpected carries. Marcelias Sutton is my personal favorite of the incoming class. In his junior season, he had 19 touchdowns and 1804 yards. At Lackawanna College he wasn’t nearly as productive, as he had a split role at running back, but he is a stud and all you need to do is turn on his tape, and you’ll see the guy is an all-purpose freak! He should be in Norman within the week and will participate in spring ball and this will help him immensely down the road, if he is to get the starting role. Kennedy Brooks rushed for over 2,800 yards and scored 40 touchdowns this season as a senior. The guy is an absolute stud. As is incoming back Trey Sermon who is listed as one of the top-5 backs of the 2017 class. He has the power to run guys over and the speed to make people miss. In other words, Sooner fans, the future is bright. Oklahoma will be loaded at running back in 2017 and with the talent at wide receiver and Baker Mayfield coming back for another season, the expectations should not be lessened by the loss of Perine and Mixon.