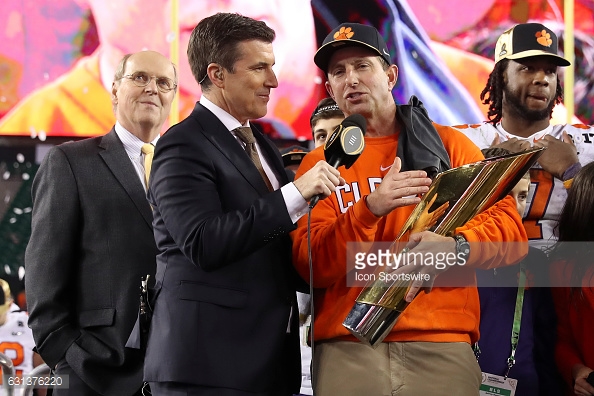 Then, one season later, the 2006 season, resulting in the 2007 Championship Game where Florida waxed Ohio State 41-14, the myth of the “SEC” was built. At the time, there was debate as to whether or not Florida should have even been in that game. That began a decade-long run of SEC dominance. But, it all came to a crashing halt on Monday night when Clemson upset Alabama 35-31 to win the National Championship and put an official end to the SEC’s flawed and mystical run as king.

The SEC agenda has been pushed heavily over the past decade and really ramped up the past few years from ESPN, which not so coincidentally coincided with the launch of the SEC Network in 2014.

Hell, Mr. SEC himself, Paul Finebaum, is a big enough fanboy (and apparently dense enough) to really believe Alabama could beat the Browns, as he told to Barstool Sports.

Could Alabama beat the Browns, according to @finebaum, yes. Full episode http://t.co/htoaCr8KQG pic.twitter.com/7d1sTDItaQ

For the record, the Browns would beat Alabama 49-10.

Remember the days when folks predicted multiple SEC teams in the College Football Playoff?! This year’s rankings end up with 1 team in the Top 10: Alabama. That’s even more embarrassing when you consider how the SEC gets teams stacked into the preseason rankings, which makes it often harder to fall out of the Top 25 and easier to rise back up the rankings. That is one of the great overlooked aspects of the “rankings system” as it related to SEC bias in recent seasons.

Was this Alabama team a great football squad? Hell yea. They were seconds away from beating Clemson to win back-to-back National Championships, which would have given Saban and the Crimson Tide 5 in the past 8 seasons.

But, that’s exactly the problem: Alabama has been carrying the SEC’s water for years now.

Yes, the SEC won 7 straight National Championships from 2006-2012. But, since the 2008 season, only Alabama has won National Titles for the SEC. And over the past 4 years, the ACC has more National Titles than the SEC (2 to 1).

After Monday night’s loss by Alabama, the SEC finished the bowl season with a 6-7 record. The Big 12 was 2-0 against SEC teams (K-State over A&M and Oklahoma over Auburn). The ACC went 8-3 overall.

Sure, bowl games don’t tell the whole story, but they do tell a part of it. A part that needs to be considered and factored into the equation of conference hierarchy.

If you want to look closer at the SEC vs. other conferences, like this article from Saturday Down South in 2014, which fairly noted, at the time, how good the SEC had been against Power 5 teams over the previous decade, then lets analyze the more recent results.

Now, as we turn our attention to 2017 and beyond, the SEC won’t be any better off. It will remain Alabama and everyone else.

The biggest reason is because there is only one elite coach in the conference: Nick Saban.

The rest of the conference has a list of guys on the hot seat: Kevin Sumlin, Butch Jones and Bret Bielema, along with several average head coaches with limited head coaching experience and/or who have yet to prove much on a big stage: Will Muschamp, Ed Orgeron, and Kirby Smart.

Think Saban is legitimately afraid about being out schemed by any of those coaches? God no.

The Big 12 pits guys like Bob Stoops vs. Bill Snyder, Mike Gundy vs. Gary Patterson, and throw Tom Herman into the mix and it’s an impressive list. The Big Ten boasts Urban Meyer, Jim Harbaugh, Mark Dantonio and more. And then there’s the ACC, who has stars such as Dabo Swinney and Jim Fisher, plus Bobby Petrino, David Cutcliffe and Mark Richt.

If you want to spend legitimate time arguing about who is a better coach, Jim McElwain or Mike Gundy, you’ll bore me to death.

But in the end, that argument can be had because because the gap between the SEC and the rest of the Power 5 conferences is now nonexistent.

On Monday night, capping off a couple of mediocre seasons of football, the shine officially wore off the SEC … thank goodness.

Now, let’s get ready for spring ball … and finally admit to a more even playing field at the Power 5 level.