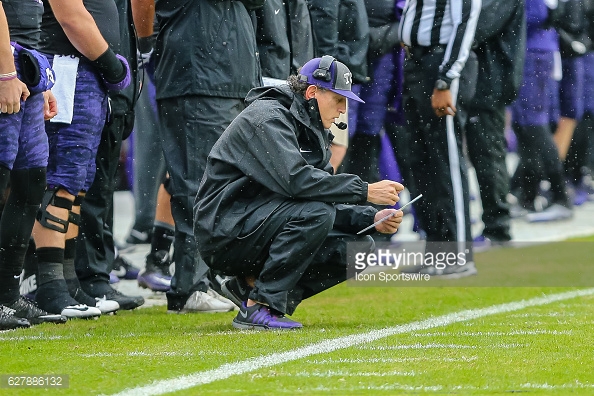 Yes, you read that headline correctly.

Meacham will serve as Kansas’ offensive playcaller and coach wide receivers, meaning head coach David Beaty will no longer call the plays, as he did this past season.

Meacham became a household name after helping lead Horned Frogs offense to unseen offensive success under Gary Patterson. He shared offensive coordinator duties at TCU with Sonny Cumbie, who coached quarterbacks but did not call plays. Ironically, it was Cumbie who turned down the Texas offensive coordinator position last offseason.

In a statement, Kansas head coach David Beaty said, “I am thrilled to be adding someone of the caliber of Doug Meacham to our staff. Doug is someone I have admired for quite some time for his creativity on the offensive side of the ball. I have had to go up against him several times and it was always a huge challenge because of his ability to direct an offense. I am incredibly thankful to have him on our staff moving forward.”

After helping lead the Horned Frogs to a tie for the Big 12 title in 2014 behind QB Trevone Boykin, TCU had another solid offensive season in 2015, before struggling this season with Kenny Hill at QB. The Horned Frogs finished 6-7 and lost to Georgia 31-23 in the Liberty Bowl.

Maybe there were signs that a shake up could be happening in Fort Worth, as TCU head coach Gary Patterson told the media after a 31-6 loss to Oklahoma State, “Shoot, maybe we’ll be changing offenses again. You have to be able to run the football.”

Then, after losing to Kansas State 30-6 in the season finale, Patterson told reporters, “Really across the board we got thrown around by everybody. We got to grow up on offense. Until they do that, we won’t win many games against good people.”

Regardless, this is a huge get for the Jayhawks, who land one of the great offensive minds in college football. Think about this, Auburn currently looking for an offensive coordinator. Meantime, David Beaty just goes out there and steals Doug Meacham away from a conference foe. Unreal.

Also, kudos to Kansas for stepping up and likely paying Meacham a very solid salary to get him to move.

With Kansas and Iowa State continuing to progress and get better under Beaty and Matt Campbell, respectively, the Big 12 just gets stronger and better. Good stuff.