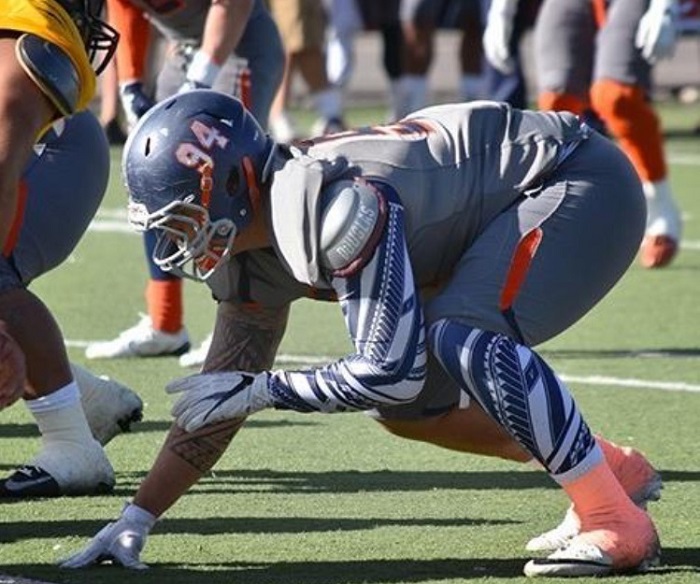 Most recruits getting ready to play at the next level are doing things like preparing for senior prom or just spending free time with friends. But, that’s not Fua Leilua. The Snow College (JC) defensive tackle is a family man, married and preparing for a baby girl who is set to arrive in June.

Leilua told Heartland College Sports, “My wife kept me grounded, she helped me mature a lot as a man and kind of realize there are more important things than being out and partying, like taking care of school work. She’s my biggest supporter. I’ve been with her since high school, so it’s been a journey.”

Leilua is a late-blooming talent who went from 6’1”, 210 pounds in high school, and he’s now 6’3”, 300 pounds. Leilua gives the credit to his defensive coordinator at Weber State, Jason Kaufusi, for helping him gain weight and strength. Yep, his bench press is up over 100 pounds.

Leilua’s road to getting to Big 12 football is a long and winding one. FCS Weber State was his only offer out of high school, and Leilua attended. After a season there, he felt he could play at the FBS level and wanted to chase his dreams.

So, where will Leilua end up? Well, despite committing to Oklahoma State in November, there is another Big 12 school in the race: TCU.

“Now with TCU coming into the picture and with them being more of a defensive school, things have been kind of crazy. I’m about to go to TCU this weekend and then I’ll be at Oklahoma State the last weekend of the month… I’ll decide on the 30th where I’ll be going.”

So, Leilua is a California kid who is likely to end up in the Big 12. But, why the Big 12 over, say, the Pac-12? The 3-star recruit told HCS, “The Pac-12 is a great conference, but I think the Big 12 has a lot more competition. Everyone’s a lot bigger, faster, stronger. In my opinion, it’s more of an outlet really and then getting that shot to go to the league.”

Whatever decision Leilua makes won’t be made alone. Once again, family is along for the ride.

Leilua grew up in a 4-bedroom house in Anaheim with 20 people, mostly on his father’s side of his family. Speaking of his father, Fili Leilua was the Southern California Football Player of the Year. The elder Leilua ended up breaking his arm at Fullerton College, ending his playing career. Since then, he taught his son the game from the age of 9, and has helped guide him along his journey.

But, where will that journey end up? Hopefully one day on the sidelines… with a clipboard (no, not as a back up quarterback).

Leilua’s favorite NFL player is Haloti Ngata of the Detroit Lions. Both are Polynesian and play defensive tackle, so Ngata is a nature fit for Leilua to look up to.

“I feel like, as part of the Polynesian culture we take pride in each other’s accomplishments and all back each other.”

One day, Leilua would love to end up being a defensive line coach at a “high level”, where he can “help other Polynesians, or really anybody who has dreams, to help them reach their full potential in life and give back to the sport that has given me so much.”

Oh, and whether Leilua ends up at Oklahoma State or TCU, you guessed it… family with be in tow. His wife and soon-to-be-daughter will join the young man in either Stillwater or Fort Worth.

We thank Fua Leilua for his time in putting together this story. Here is a link to his Hudl page and below are his highlights from this past season at Snow College.