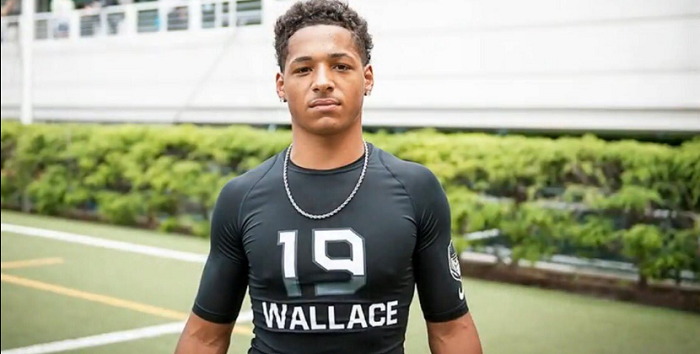 While many high school football prospects around the country are getting ready to head to their respective schools, many are doing it alone. This is not the case however for OSU WR commit Tylan Wallace. Wallace is a 5’11 wide receiver from South Hills High School in Fort Worth and is a top 100 player in the entire country. This alone is a rarity among itself but what’s even more rare is that he is catching passes from his twin brother Tracin Wallace (also an OSU commit), who is the quarterback of the South Hills football team. Tylan is an absolute speedster at receiver. He has soft hands and will burn cornerbacks in the blink of an eye if they are not careful. While I wasn’t able to cover the speedy receiver, I was able to slow him down a bit for a short interview.

Q: What really sold you on committing to Oklahoma State?

Tylan: “I would say Coach Dunn (OSU WR Coach) and the atmosphere at OSU. It is a really friendly and a nice atmosphere to be around. When I went up there, I knew this is the place that I want to be.”

Q:  OSU has produced some really good receivers over the past few years, would you say that played a big role in your commitment as well?

Tylan: “Yes, I mean personally I want to go somewhere that will throw the ball around and that has produced some good receivers as well.”

Q: Do you feel like you could see some early playing time as a true freshman?

Tylan: “Yes, They told me that I could start, but that also depends on how I do.”

Q: With Mason Rudolph coming back next season, how much do you to forward to catching passes from a guy like him?

Tylan: “I really look forward to it, I mean what receiver wouldn’t? I saw him play this year and I just couldn’t wait to get up to Stillwater.”

Q: What are your thoughts about Mike Gundy being your future head coach?

Tylan: “I can’t wait. He is one of the best there is and I love how he protects and cares about his players.”

Q: What’s it going to be like to experience college alongside your brother (Tracin)?

Tylan: “I feel like that it will be a lot of fun and a lot easier. I get to play college football with someone that I have been playing with my whole life and grew up with.”

Q: You’re the headline of the 2017 OSU class, who are some guys that you are trying to pull along to Stillwater with you?

Tylan: “I wouldn’t say there are specific people that I am trying to pull in. Of course I want guys that will come help out but I also want guys who want to be there.”