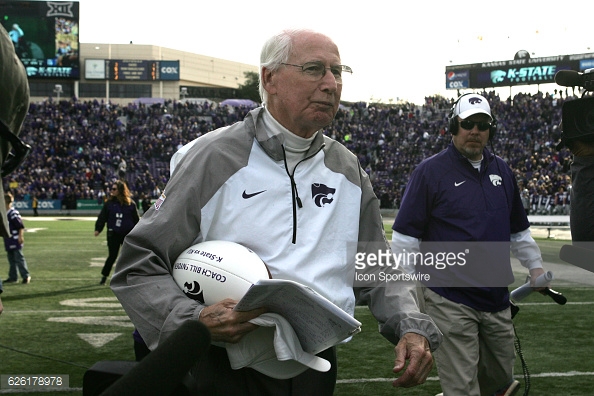 With plenty of time to kill this offseason, why not put together a “dream team” for a Big 12 coaching staff?

I decided to go ahead and pick who I believe would be the ideal coaching staff in the Big 12 for each respective coaching position. Enjoy and please agree or disagree by commenting below the article!

Has there ever been a head coach to do more with less? And who else has turned around a program that was a laughing stock for decades into a National Championship contender like Snyder did in the 1990’s? Yes, he is the architect of the “greatest turnaround in college football history”.

Not only that, but his recent success, since returning to the sidelines in 2009, has been just as impressive. Snyder has 57 wins the past 7 seasons, averaging 8.1 per season, all while having a recruiting class that, on average, ranked 61st in the country (according to Rivals) over that time period. Amazing. That of course includes the 2012 team, which was at one point 10-0 and ranked #1 in the BCS Standings.

There is no coach in all of college football who embodies what college athletics is supposed to be about: yes, winning, but also family, community, and building young men into adults.

I know there have been coaches who have had more success in the Big 12 than Snyder (Bob Stoops), but Stoops has also brought in tons of 4 and 5-star guys, and frankly, hasn’t always been the best in the “Big Game (Bob)”. I’m not talking for the next ten years, but if I needed to win one game, right now, I would want Bill Snyder as my head coach.

When Riley came to Norman the question was, “how is an Air Raid coordinator going to utilize Samaje Perine?!” Riley has proven to be able to take an Air Raid style offense, but still have a very strong running game behind Samaje Perine and Joe Mixon (both off to the NFL Draft).

In just two seasons in Norman, Riley has become one of the nation’s hottest assistant coaches, with considerations for head coaching jobs by folks at Houston and Oregon. After seeing the offense struggle in previous seasons under Josh Heupel, Riley took the reigns of the OU offense and set the conference on fire. In his first season at Oklahoma, Riley led the Sooners to the 7th ranked offense in the country and he also won the Broyles Award, awarded to the nation’s top assistant coach.

This season, the Sooners ranked first in the Big 12 in scoring offense and second in total offense.

But, not only the numbers, but his tutoring of QB Baker Mayfield has been great, as Mayfield should head into the 2017 season as a Heisman favorite. Frankly, I think he should’ve won it this past season. Regardless, Oklahoma is going to have a tough time keeping Riley in Norman in the future.

Dunn is one of the most under-appreciated assistants in the Big 12. He has coached a 1,000-yard receiver in four of his six years at Oklahoma State. Dunn coached Justin Blackmon to the 2011 Biletnikoff Award and a unanimous All-American. Blackmon set the OSU single-season record for receptions in 2011 and was the fifth overall pick in the 2012 NFL Draft.

But, what Dunn has done with guys like Blackmon, Josh Stewart, Tracy Moore and now James Washington is even more impressive because these were not 4 or 5-star recruits, but mostly 2 or 3-star players, who ended up having outstanding careers. That’s the ultimate sign of a great coach.

Drayton is one of Tom Herman’s best hires. Drayton and Herman coached together at Ohio State where Drayton tutored Ezekiel Elliott and Carlos Hyde. Most recently, Drayton spent the past two seasons with the Chicago Bears, where in 2016, he helped 5th round pick Jordan Howard, from Indiana, set the Bears single-season rookie rushing record with 1,313 yards, and become the NFL’s second-leading rusher behind … Ezekiel Elliott.

Drayton’s resume includes two stops at Florida where he was recruiting coordinator and helped the Gators win a National Title in 2006. His ability to get the best out of his pupils dates back to the 1990s when Brian Westbrook, a D1-AA player at Villanova, became a 2x All-American and went on to have a successful NFL career with the Philadelphia Eagles.

The Cyclone recruiting efforts have drastically improved under Golesh. ISU assembled one of its highest-ranked classes in school history in 2016, earning top-50 recognition among the majority of the national recruiting services. According to Rivals, Iowa State is currently the 34th ranked class in 2017, which is 4th in the Big 12. That’s likely to change, but who even thought that was possible at this point in the game just a few short years ago?

Already, Golesh’s imports included five true freshmen who made an impact this past fall, including running back David Montgomery and wide receiver Deshaunte Jones, two of the best offensive rookies in the Big 12 in 2016.

Golesh and Matt Campbell were assistants at Toledo together from 2009-2011, where Golesh’s tight ends served as key blockers in a Rocket rushing attack that ranked No. 3 in the MAC in both 2010 and 2011.

Gibson has quickly established himself as one of the best coordinators in the Big 12. After coaching the 2015 defense to No. 1 in the Big 12 in rushing defense, interceptions and opponent first-down defense and second in scoring defense, total defense and opponent third-down defense, while losing key players (Karl Joseph, Daryl Worley, Nick Kwiatkoski, and KJ Dillon) to the NFL, Gibson didn’t miss much of a beat this season.

The Mountaineers were third in total defense, third in rushing defense, and sixth in passing defense this season, while ranking 2nd in scoring defense.

He’s been a Power 5 coach for fifteen years and has coached 16 future pros and 22 All-Conference players, many of whom were not close to being top recruits when they stepped on campus.

Clements joined the Oklahoma State coaching staff four years ago, right after helping Kansas State win the Big 12 title in 2012. That season, K-State led the Big 12 in scoring defense and ranked second in the conference in rushing defense.

Oklahoma State ranked third this season in the Big 12 in sacks. Vincent Taylor is the latest defensive line prospect who should burst onto the national scene in 2017 as a legitimate NFL prospect. Most recently, 2015 First-Team All-America defensive end Emmanuel Ogbah ended up as a first-round pick in the NFL Draft last year.

Mr. Jayhawk himself, Clint Bowen, has seen it all. From successes in Lawrence nearly 10 years ago, to incredible disappointment in recent seasons. While he is the co-defensive coordinator, Bowen also coaches the safeties, hence while I am putting him here in the defensive backs spot. Despite all the struggles, the defense has been able to hold its own and has not been the problem (for the most part) in Lawrence. This season the Jayhawks ranked first in the Big 12 in passing defense. Granted, some of that was because their run defense was horrendous and team up several scores didn’t want to throw the ball, but it still is impressive for a team that won 1 league game.

To give you an idea of Bowen’s potential, when things are going right at Kansas, as co-defensive coordinator, the 2007 Kansas defense ranked fourth in the nation in scoring defense and ranked in the top-10 nationally in both passing defense and rushing defense. It’s possible and it can be done again.

I understand there are many Wildcats fans who are not big fans of the younger Snyder, or more so at the possibility of him replacing his old man. But, you can’t deny the job he’s done with the special teams in Manhattan.

This was the first year since 2012 that the Big 12 Special Teams Player of the Year was not a Wildcat. Last year, Morgan Burns took home the award, while also being named a First Team All-American. Also last season, Snyder coached two place kickers – Jack Cantele (first team) and Matthew McCrane(honorable mention) – and punter Nick Walsh (honorable mention) to earn accolades from the league’s coaches.

So, what do you think of our picks? Love ’em? Hate ’em? Let us know in the comments below!