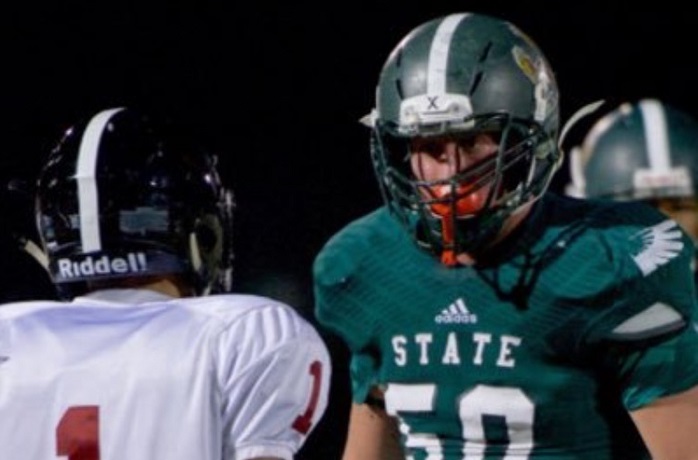 Crimson and Blue practically bleeds out of the Dineen family.

Jay Dineen is just the latest in a long list of family members to play or attend Kansas University. Both parents of the Lawrence Free State High School linebacker are Kansas grads, and his mother, Jodi, played volleyball for the Jayhawks. Meantime, his grandfather, Ron Oelschlager, was played football at KU in the early 1960’s, and blocked for Gale Sayers.

Oh, and then of course there is Jay’s brother, Joe, who is currently a linebacker for KU and the two will be on the team together next season.

“He was a pretty big influence [on my decision to attend KU]. It will be fun to play with him again. I played with him as a freshman [in high school] and got to practice with him. And then I got to play with my younger brother this past year, so playing with a brother always sounds good. But, just being able to play in front of my family was a really big part of it.”

And of course, don’t forget that big brother-little brother mentality, which Jay knows is coming, telling Heartland College Sports, “Oh it’s going to help me a lot. He’s going to push me to limits that I probably shouldn’t be able to go, but he’ll push me to those, and I’ll push him, and we’ll get a lot better.”

The football blood doesn’t just come from Dineen’s grandfather, but also from his father, who played at Creighton Prep in Omaha and then went to college at South Dakota before suffering a career-ending knee injury. His father ended up transferring to Kansas to focus on the academic side of his college career.

So, this decision to attend Kansas was pretty much decided at birth. It was a natural decision for Dineen, who has been to most KU bowl games over his lifetime, including the 2008 Orange Bowl.

When Jay isn’t playing football, you can still find him doing something athletic, from playing hoops to fishing at Clinton Lake on the southwest side of Lawrence. In fact, if his father has his way, the two will be going on a fishing trip to South Dakota in the near future.

And whenever his playing career is over, don’t expect Jay to stay too far away from the game, saying, “I’d love to be a coach, either high school or college. I just really enjoy being a part of football and being around the game. It’s my passion. But, if that doesn’t work, I’d like to go into business like my dad did.”

But, there’s plenty to accomplish between now and then. Jay has total belief in Coach Beaty, saying “just the connection he makes with his recruits is awesome. Right away when I started talking to him I knew I wanted him to be my coach.”

As for defensive coordinator Clint Bowen, Jay’s younger brother and one of Clint’s sons are actually good friends, which once again helps Dineen feel comfortable as he prepares for the next level.

In fact, Dineen is actually already eyeing the 2017 KU schedule, hoping to help get KU back to being bowl eligible sooner than later and ideally get the chance at a bigger bowl game at some point during his career.

But, with so many ties to KU, I had to ask if there were any other schools on his radar. Dineen admitted that Kansas State was “for a little bit, but every other school was always second.”

Naturally, I had to ask him what the consequences would have been from his family had he ended up in Manhattan? “I don’t know and I’m glad I don’t! I don’t know if I would’ve been welcomed home!”

Safe to say, the young man seems to have made the right choice.