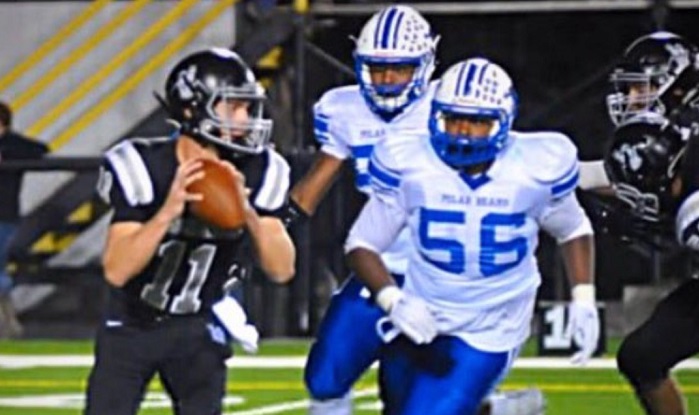 Watch your back, Michael Strahan, Terry Bradshaw, and Boomer Esiason.

If West Virginia defensive tackle commit Darius Stills has his way, when his playing career is over, the young man will be giving his opinions on the studio on either college football or the National Football League.

In my discussion with Stills, it was clear this was a confident young man who is articulate and realistic.

“My interests outside of football include education because, honestly, one day football is going to end… I’d like to one day be a sports commentator. I’m going to study communications in college and see where it takes me.”

Stills was originally committed to Rutgers, but the pull of home, as Stills has spent his entire life 15 minutes from Morgantown in Fairmont, was too much to turn down, telling Heartland College Sports, “It was my home state and I wanted to stay home and represent my home stay and play in the Big 12. It wasn’t a hard decision because I always wanted to go to West Virginia my whole life.”

If the last name Stills sounds familiar, it should. Darius’ father, Gary, played at West Virginia, and then in the NFL for 10 seasons for the Chiefs, Ravens and Rams.

But, the young man said one of the biggest misconceptions about him and his family is that they grew up and lived with a silver spoon in their mouths because of their NFL ties, saying, “people don’t see what actually happened in my life. They say, ‘oh your dad is in the NFL, that’s so cool, I bet you’re rich and stuff.’ No, it’s not like that. Our family has struggled. And I promised my mom and everybody in my family that one day, when I make the NFL, they won’t have to work a day in their lives and won’t have to worry about anything. That’s why I want to make the NFL, so my mom and my grandparents don’t have to worry about anything.”

In fact, Stills saw the story that went viral about former Mountaineer Karl Joseph buying his mother her dream house recently, and added, “my mom told me about her dream house, and I’ll always remember it and give it to her one day.” Stills raved about his mother, who raised him and his two siblings by herself, and helped and lead the family with faith and hard work.

With all this being said, Stills did say his father has taught him a lot about perseverance, adding, “he always told me just because you live in a small town and a small state, that doesn’t mean you can’t make something of yourself. My dad is front a small state (Trenton, New Jersey), and I figured if he can do it, I can do it.”

Darius has plenty of great memories playing with Dante at Fairmont Senior High School, including one memory that stands out from this past season. “There was one play, I said, ‘beat me there, beat me there’ before the play, and the [Weir County, WV] quarterback dropped back, and at the same time, Dante hit him low and I hit him high, and we just demolished him.”

Mountaineers fans would love to see several plays like that happen against Oklahoma, Texas, and Kansas State.

So, whether or not Dante joins him in Morgantown, Darius is happy to be close to home, so he can help out with the family when needed, which he couldn’t do when he was committed to Rutgers. He’s also thrilled his mom will be able to see all his home games.

And, as Stills prepares for Morgantown, he will be joined by a friend and fellow WVU commit, Maverick Wolfley. They’ve been friends since 7th grade and since freshman year the two have talked for years about their dream of playing against Oklahoma.

So, when some fans worry about whether or not incoming players have a passion for their team, that isn’t even close to being an issue for Stills, who ended our conversation by saying, “let all the Mountaineers fans around the country know that I’m not going to let them down. I’m going to represent my home state and I’m going to do my best on the field and off the field to be the best person I can be and everybody will be proud.”

My guess is they already are.