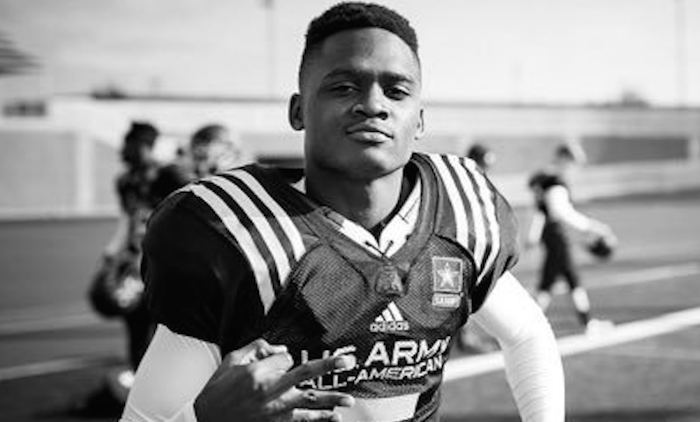 It’s not unusual this time of year for college football recruits to start flipping commitments and showing some disloyalty to the program they’ve been “committed to” for months. It happens and it’s part of the game that is big-time college football.

One of the more recent examples was the de-commitment of West Virginia 3-star wide receiver Mike Harley Jr.  Harley is from Fort Lauderdale, FL and committed to the Mountaineers last June. But as time went on, his commitment seemed shakier and shakier, and then we got this tweet from Harley over the weekend.

But, this came after a strange, back and forth, couple of months involving Harley. He said back in December when the Russell Athletic Bowl was announced, he would make his college decision based on who won the game between Miami and West Virginia. Then, after Miami won, he insisted he was still committed to West Virginia. But, just a week before visiting Morgantown this month, Harley was flashing his visit with Mark Richt and the Miami Hurricanes on Twitter.

So, since the reports of Harley decommitting from West Virginia, there have been multiple reports that Mountaineer coaching staff actually pulled Harley’s offer following his official visit to Morgantown.

After a long-winding story that is likely to end up with Harley in Coral Gables, the Mountaineers made the right move letting Harley go elsewhere.

Sometimes, recruiting isn’t all about getting the most guys with the most amount of stars next to their names. Sometimes it’s just about getting the “right guys”. What exactly does that mean? It means bringing in players who are not just fits on the field with their skill sets,  but also culture fits and personality fits.

When a recruit tells you he’s committed and then he’s visiting other Universities, that’s it. I’m done. If a player wants to reopen his commitment and is open and honest about it, then sure, that’s understandable. People have change of hearts all the time, that’s allowed. But, not being upfront and honest is inexcusable.

So, good for Dana Holgorsen. He has the Mountaineers coming off a 10-win season, he doesn’t need to beg a 3-star recruit to join him. Not only that, but other red flags include the aforementioned story of Harley saying the winner of Russell Athletic Bowl will decide where he attends. Even though Harley backtracked on those comments, who in their right mind says something like that? Someone looking for attention, that’s who.

Here’s another sign of “Me first” attitude from Harley ahead of the Russell Athletic Bowl:

Geez. All about you, pal.

I get it. As college football recruiting gets more and more popular, it can blow up the egos of 17 and 18-year-old young men. But, there is still a place for humility and you can find it in many recruits. Just because you have 3, 4, or 5 stars next to your name doesn’t mean you need to have a certain amount of narcissism to go along with it.

With all this being said, I hope WVU fans don’t bother giving Harley a hard time on social media. It’s not worth it. Fans may be disappointed to hear the news of West Virginia losing an All-American wide receiver, but, I’m telling you, this is actually good news for the team moving forward.