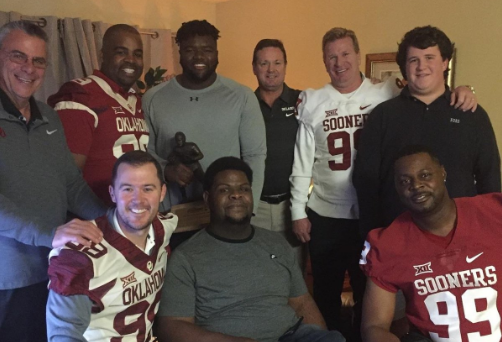 National Signing Day is just over a week away and one of the hottest un-committed recruits is Episcopal High School defensive tackle Marvin Wilson. He’s ranked by many services as the top defensive tackle in the country and is a top-ten player nationally. Many believe that Florida State, LSU and Ohio State are the favorites to land Wilson, but the Sooners coaching staff is clearly making a major push late in the process.

So, it was OU head coach Bob Stoops and assistants Mike Stoops, Calvin Thibodeaux, Lincoln Riley and Dennis Simmons all went to Houston Monday night to visit Wilson and wore No. 99 jerseys, Wilson’s high school number. You can also see in the picture the Oklahoma staff brought an Outland Trophy, which is given to the best interior lineman in college football. The last OU player to win the award was OT Jammal Brown in 2004. As a program, the Sooners have won 5 Outland Trophies, which is 2nd to just Nebraska, who has 9 Outland Trophy winners. The most notable Sooner to win the award was Lee Roy Selmon in 1975.

Oh and for what it’s worth, former Sooner great Gerald McCoy gave his 2 cents to Wilson on Twitter.

According to ESPN, Wilson has in-home visits Wednesday with Ohio State and Thursday with Florida State. He will announce his decision on National Signing Day.