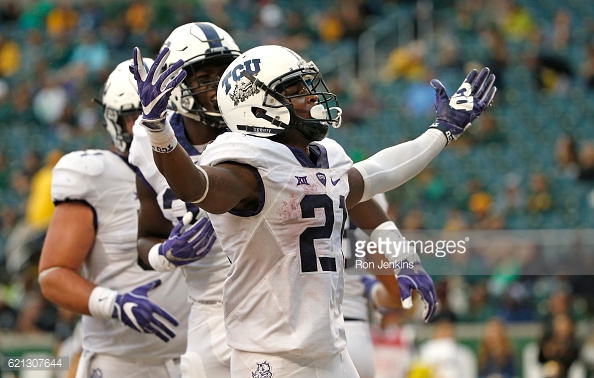 TCU running back Kyle Hicks and two former Horned Frogs football players, Bryson Henderson and George Baltimore, were arrested in Fort Worth and charged with public intoxication in an incident from over the weekend.

According to the Fort Worth Star-Telegram, police officers responded to a complaint about a fight at a restaurant near the TCU campus. There they took Hicks, Henderson, and Baltimore into custody on misdemeanor charges of public intoxication early Saturday morning.

The paper also reported that two other people were also arrested and charged with public intoxication in the incident.

Hicks is coming off a solid junior season where he earned All-Big 12 honorable mention and rushed for 1,082 yards and 12 touchdowns. Also, Hicks caught 47 passes for 417 yards. Hicks’ best game this season game against Baylor when he rushed for a career-high 192 yards and five touchdowns.

The TCU athletics department said in a statement Monday night that officials are aware of the incident and looking into it.