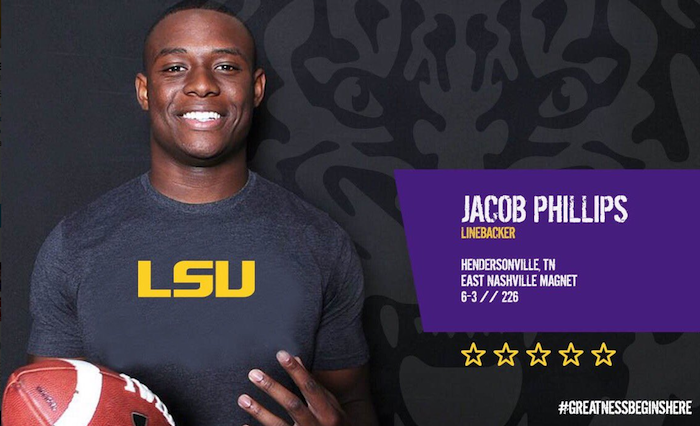 As can happen in the final days ahead of National Signing Day, some big names will de-commit and select a different program. Unfortunately, that’s happen to the Oklahoma Sooners.

The only 5-star recruit they have in the 2017 class, linebacker Jacob Phillips from Nashville, Tennessee, has flipped from Oklahoma to LSU.

Happy and blessed to announce I will be spending the next 4 years at LSU ???#GeauxTigers#GlorytoGodpic.twitter.com/pklOTUzvsg

The 6-foot-3, 228-pound U.S. Army All-American recently finished an unofficial visit to LSU, and according to SEC Country, was on the verge of committing to the Tigers during that visit. But, he decided to give it some thought before pulling the trigger.

This one hurts, as Okahoma had a Top-5 class that will likely now drop a few spots. LSU is a bit closer to home for Phillips, but it could have been the pull of the “SEC defenses” that the media keeps hyping that got Phillips to commit to LSU. Who knows. But, if Oklahoma can get 5-star defensive tackle Marvin Wilson to join them, the loss of Phillips will sting a bit less.