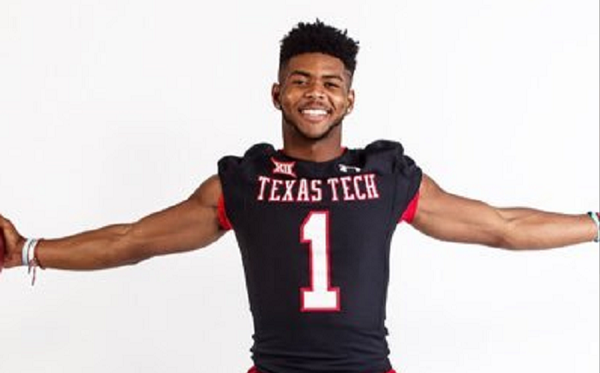 Texas Tech quarterback commit Xavier Martin has always had a chip on his shoulder. He’s undersized by most quarterbacks standards (6′, 175) and is technically listed as an “Athlete” by most recruiting services. But, after speaking with Heartland College Sports, Martin said, “quarterback is the only position I’ll play”.

And, why not? As Martin prepares to join quarterback whisperer Kliff Kingsbury in Lubbock, he has plenty of confidence. Martin led the Cibolo Steele Knights to the State Championship Game, where they lost to DeSoto 38-29. He finished the season completing nearly 63% of his passes with 22 touchdowns to 3 interceptions, along with 728 rushing yards. His own coach, Scott Lehnhoff has compared Martin to former Nebraska QB Tommy Armstrong, not too shabby.

In fact, Martin’s best memory growing up in Cibolo came just a few weeks ago during the parade before going to State. As Martin put it, “it was amazing, and it really made me realize how many people truly supported us.”

Cibolo, Texas has gone through unprecedented growth in recent years, seeing a 400% jump in population from the 2000 census up to 2010. The population has jumped from about 3,000 residents to north of 15,000. It’s location is about 25 miles northeast of San Antonio.  Retail, construction and public administration are primary career paths for locals, and it was recently named one of the fastest growing towns in America.

With the game and the parade being one of Martin’s personal highlights, along with getting to play at AT&T Stadium in Arlington, Martin said he didn’t dwell on the loss, saying, “there’s a lot more important things to worry about than football.”

Like what? Family for one. Martin has an older sister, 23, who is currently living with her family at home while her husband, who’s in the military, is stationed in Kentucky. Martin’s sister and her husband are high school sweethearts, but did not attend the same high school, they met while working at Burlington Coat Factory. Martin said he’s been happy to have his sister around as a role model, but admitted his parents are his ultimate role models, who he “looks up to like none other.”

As for his upbringing, Xavier Martin was not always a football kid. In fact, he didn’t pick up the pigskin until 7th grade. He was always a  basketball kid before that. There was no “football gene” in his family to speak of. His father ran track, but that was the extent of his immediate family’s athletic background.

So, if football doesn’t work out as a career, Martin will have plenty of options. Sure, he admitted that playing in the NFL is his dream and goal, but if that doesn’t work out, he wants to run his own hotel chain. The hospitality, business aspects, and professionalism needed interests Martin.

Heck, if Cibolo keeps growing at this pace, he might not have to go far to get that hotel chain up and running.

But, there’s plenty of football successes to be had in Lubbock and possibly elsewhere before that comes into the picture.

If you want to check out Martin’s highlights, here they are: