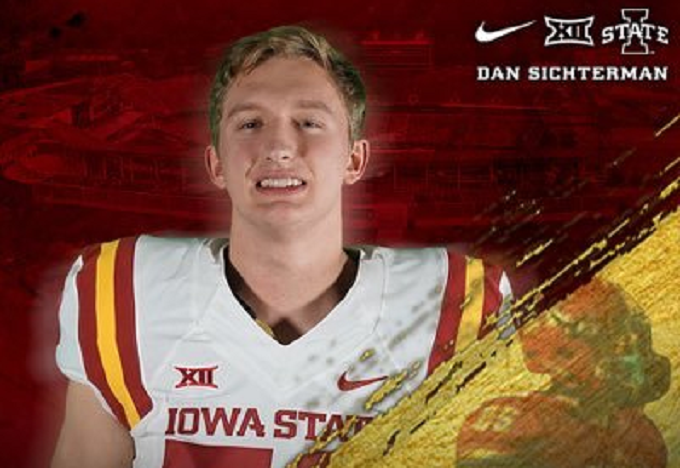 Mark and Judy Sichterman were good athletes in their own rights. Mark played center on the Drake University football team, while Judy was a swimmer at Clemson.

Dan Sichterman of King Mills, Ohio is the only one heading to the Big 12, where the defensive end will join Matt Campbell and the Iowa State Cyclones. So, the real question is how did his parents juggle such insane schedules while the three were growing up? Dan told Heartland College Sports, “We actually played on a lot of co-ed teams of several different sports growing up. After we were done with those my parents split up quite a bit to get my sister to her practice and my brother and I to ours. When we turned 16 and got our licenses, that was a big relief for them!”

Dan’s brother, Matt, is heading to play at Nebraska as an offensive lineman, while Megan is going to swim at Tennessee.

Sichterman admitted he considered being a “packaged deal” with his brother, but their recruiting processes were very different. Matt committed to Nebraska before Dan even started getting many offers. Dan added, “a lot of schools wanted to see me at camp first. So it is definitely something we considered but the timing was a little off. In the end, we both found great fits and will be pretty close to each other, so I think it will work out well.”

The drive from Omaha to Ames is about two-and-a-half hours, So, if the Cyclones have an 11 a.m. kick off and the Cornhuskers are in prime time (or vice versa), there is certainly a chance that the Sichterman’s can catch both sons play on the same Saturday. Here’s to hoping gas prices stay reasonable!

Dan will miss a lot about playing with his brother, but mostly how much they push each other, saying, “Whether it’s in the weight room or on the field, we hold each other at a high standard and are able to get the most out of each other through that. I’m also going to miss the o-line, d-line drills against each other because they have helped me become tough through the years.”

The Sichterman family moved from Wisconsin to King Mills, Ohio when the triplets were in junior high. The move worked out well, as Kings Mill is about 25 miles northeast of Cincinnati and Dan’s mother has plenty of family in the area.

Dan and Matt spent much of their childhoods at the Kings Island Amusement Park, which is the largest amusement park and water park in the Midwest. Riding the roller coasters was a huge part of growing up in King Mills, a town that Dan admitted he’d like to come back to at some point after his football days are over.

Sichterman will study business at Iowa State and while he doesn’t know exactly what he wants to be, he could see himself on the sidelines, be it high school or college.

As for high school, the last three years his team went 11-1, 11-2, and 8-3, including three wins over their biggest rival, Loveland. His favorite play from high school was a 50-yard pick six this past season, something Cyclones fans wouldn’t mind seeing in future seasons against Shane Buechele, Mason Rudolph, or Jesse Ertz.

Sichterman is a carry-over from Campbell’s days at Toledo, that is where the relationship was first developed. But, Dan can’t wait to get on campus and play on Saturdays at Jake Trice Stadium saying, “I was drawn to Iowa State by the coaching staff and the people. I was so impressed by the atmosphere on Game Day and just the fan base in general.”

As Matt Campbell’s rebuild continues, Sichterman is the kind of player on the field and off the field that will be a major asset for the program moving forward.

Check out Dan’s highlights below!