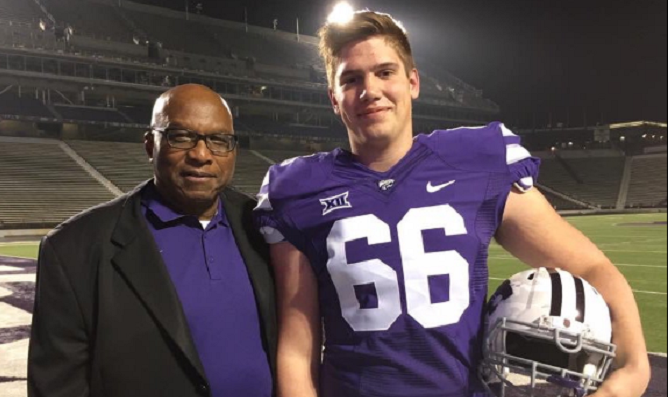 Learning the playbook won’t be an issue for incoming Kansas State offensive lineman Aidan Mills. The Newton, Kansas native is heading to Manhattan where he will be studying Chemistry.

Mills told Heartland College Sports, “I’d like to possibly be an anesthesiologist. Ever since I’ve taken Chemistry in high school it’s always been really interesting to me and easier for me doing math with chemicals than more traditional math.”

But, his interest in science/medicine runs in the family.

His sister is also studying to be in the medical industry. She would like to become an ecologist, but is also double majoring in genetics at the University of Minnesota. Not too shabby.

Ironically, the medical field does not run in the  Mills’ family. His parents own a bike shop and his father is also a psychology professor at Sterling College (about an hour northwest of Newton) and a pastor.

It was clear early on in my conversation with Mills that while he has a great passion for football, he is not defined by it. His other interests include camping, hunting, going out on the lake, and anything outdoors.

As for Mills’ decision to attend Kansas State, it is about more than football, saying, “I’m very excited to get up to Manhattan and have head coach Bill Snyder help me grow not just as a player, but also as a person.”

But, as for football, Mills’ career began in 3rd grade as a fullback, moved to quarterback in middle school, along with linebacker, and then in high school switched to defensive and offensive lineman.

Mills is the classic diamond-in-the-rough recruit for Bill Snyder’s staff. Mills is a player who still has to add some weight, but has played several positions, is smart, motivated, and comes from a solid family.

Speaking of his family, again, Mills has a brother who is already 6’2” and is only in the 7th grade. But, unlike Aidan, he’s too thin for the pigskin, but is quite the basketball player and has aspirations of playing hoops at the Division I level.

In fact, Aidan once sent his brother to the hospital in a classic “kids will be kids and boys will be boys” moment. At 10 years old, Aidan was running around in the back yard and as he put it, “I had the bright idea of swinging around a large board.” Unfortunately, Aidan didn’t see his brother coming, who was only 5 years old at the time, and Aidan put a hole in his brother’s cheek, which required stitches. But, Aidan didn’t come away unscathed. He was so upset with himself he slammed his own fingers in the door!

For the record, the brothers have grown past that painful moment.

Oh, and on the outside chance football and/or chemistry doesn’t work out for Mills, he could find a future in the Octagon. Mills was involved with MMA for quite a few years and as a kid he earned a National Title for sparring.

But, Mills isn’t even looking that far ahead, he’s just excited to get to Manhattan.

“I’ve been up there for a bunch of visits, I’ve probably visited about 7 times and every time I was up for a game the fans were just amazing up there. So that was just one of the main things that helped me decide to attend Kansas State.”

No doubt Wildcats fans will enjoy watching his progression and improvement over the next few years!

Kansas football is in quite a unique position going into 2022 as the Jayhawks are coming off a 2-10 season but have...

The Oklahoma Sooners got a bit of bad news on Tuesday as it was announced that transfer linebacker T.D. Roof would miss...