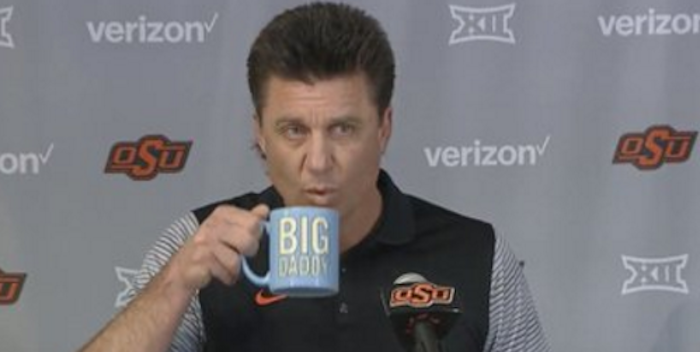 Screw some of these loser 17-year-old recruits who act like they are already Tom Brady or Adrian Peterson. 95%+ of them are good kids, but some are egotistical douches (see below).

They try to scoop up all the attention they can before proving a single thing on the football field at the college level. Most assume they’re destined for the NFL when the majority will piss out long before then. Sure, some of it is our fault as the media. But, at the same time, a slice of humble pie never hurts.

Let’s get to the real stars in college football: the head coaches.

And Mike Gundy just proved he is the ultimate “Big Daddy”. The guy is still killing it with his mullet and then he breaks out this sick mug on National Signing Day. The whole thought is a million times cooler and subtly more funny than anything any recruit will do today.

There is not another Head Coach in America that had a “Big Daddy” coffee cup at his #NSD17 press conference‼#GoPokes #okstate pic.twitter.com/lQae4acOKj

As for where this all came from, we might have to give credit to quarterback Mason Rudolph.

If that’s where this all started, then that is pure gold.

Oklahoma State could have the crappiest recruiting class in the Mike Gundy era and today would still be a huge success for the Cowboys.

I’m picturing Gundy walking into a recruit’s living room this time next year, aviators, mullet, leather jacket … flips down his shades, looks at the recruit, who is cowering on his couch like the little boy that he is, and says to the young man, “do you want to f*cking play for Big Daddy or not????”