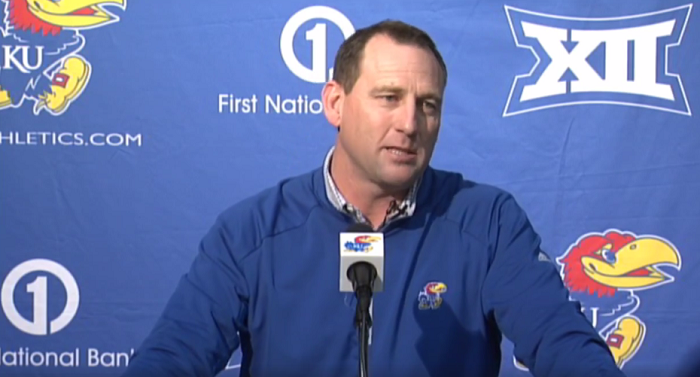 Brick by brick in Lawrence, Kansas.

The KU administration and fan base is, rightfully so, willing to give coach David Beaty a few years to try and turn around a dormant Kansas football program. The results haven’t really shown up yet on the field, but fans are starting to see a team that is more competitive with more depth and there are some quality pieces coming in on the recruiting trail as well. Kansas brings in 21 commitments and has a class ranked 55th by Rivals.com.

Slow and steady will win the race (relatively speaking) for the Jayhawks.

Yep, the Jayhawks landed a 4-star player … in football! Beaty has now landed one in two-straight recruiting classes.

Wiliams chose KU over Arizona State, Baylor, Boise State, and a slew of others. But, when Williams gave his verbal commitment to KU nearly a year and a half ago, naturally some were skeptical it would hold on through National Signing Day. Williams ranks 10th on the all-time rushing list in Texas high school history.

Much of the credit for bringing in Williams goes to KU running backs coach Tony Hull, who took over the position last year. With leading rusher Ke’aun Kinner’s college career over, Williams will have plenty of chances to see the field next fall. Expect to see more of sophomore Khalil Herbert, who averaged over 4 YPC on just 44 carries last season, along with junior Taylor Martin. But, it could very well be Williams who ultimately steals the No. 1 RB spot for both of them and becomes the star of the Kansas backfield.

This could have easily been the running backs, as Dominic Williams and Octavius Matthews may be the best running back duo recruited in the Big 12 in 2017.

But, the wide receiver class has the potential to be special and deep as well. Kenyon Tabor (Derby, KS) is a massive target at 6’4”, 212 pounds, and was named the top pass catcher in the state by CatchItKansas.com. Travis Jordan is not technically listed as a wide receiver but was recruited by Beaty to play the position and at 6’2”, 185 he has the ideal size to play it. Takulve Williams (New Orleans, LA) was an outstanding return specialist in high school and represents more of a slot receiver with his size at 5’11”, 180 pounds. Speaking of slot receivers, Texarkana target Quan Hampton is only 5’8”, but has a vertical of 40 inches and holds his high school’s record for receptions and receiving yards. The JUCO of the group is Kerr Johnson who is on campus and will participate in spring ball. Johnson is only 5’11”, but has a 6’4” wingspan, so he is another player who could see the field sooner than later.

The interesting angle to this is that the Jayhawks return 4 of their top 5 receivers from last season. But, with Beaty committed to the air raid offense and bringing in Doug Meacham as offensive coordinator, you can never have enough wide receivers!

The Kansas 2017 recruiting class could use more depth at: offensive line

The Jayhawks have just two offensive line commits, and one may actually end up playing defensive line. Earl Bostick decommitted from Appalachian State and joined KU just days before National Signing Day. The staff loves Bostick and is being called a steal, but the Barnwell, South Carolina native may end up on the defensive line. He’s a good grab as a versatile two-way player who also played hoops in high school. Joining Bostick is Joseph Gilbertson (Wichita, KS), who is a top-100 offensive guard in the country.

The good news for the Jayhawks is that they lose just one offensive lineman from the two-deep. So, they don’t necessarily need the help immediately on the offensive line. I would expect Gilbertson to redshirt and if the coaching staff thinks Bostick can make more of an impact on the defensive line, he will get time on that side of the ball.