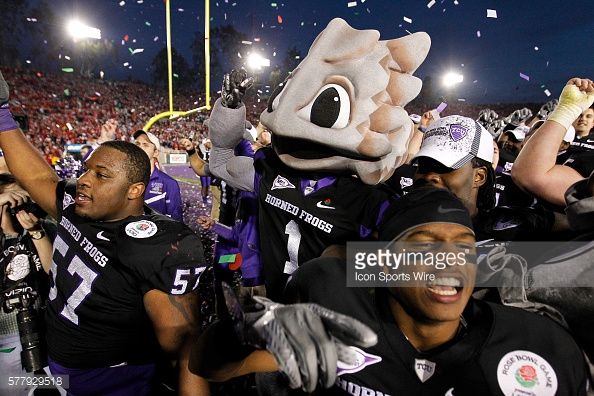 TCU’s class was ranked just outside the top 40 by Rivals.com and clearly this class was about becoming a team more in the mold of what head coach Gary Patterson expects. “We wanted to get back to being more physical as a football team,” Patterson said. “What Gary Patterson TCU teams are like.”

Patterson added, “I went back to guys, not demeaning previous classes, to add  toughness.” Well, he kind of did rip the previous classes, but that’s not totally the point. Clearly, it’s obvious that there is a shift coming in the TCU mindset. While they opened up the offense with the air raid and had a ton of success, Patterson did not seem to be happy with the results this past season. So, let’s get to what this class is all about.

Robinson is already drawing comparisons to Trevone Boykin. Robinson can throw on the run, move well, and has a cannon for an arm. Depending on which service you follow, he’s either a 3-star or 4-star QB, but regardless, he held offers from Alabama, Clemson, Oklahoma, and Texas.

Some fans may want to see Robinson thrown into the mix next season following the disappointment of Kenny Hill. But, I would proceed with caution. He completed less than 60% of his passes last season despite playing behind an offensive line that has 3 players sign with Power 5 programs.

But, don’t expect the chatter to go away, as Robinson is already enrolled at TCU and gunning for the starting job as a true freshman.

For all the talk about becoming a tougher and more physical team, it doesn’t appear like Gary Patterson wants to throw the ball any less. Of his 21 commitments, 5 of them are wide receivers and two are absolute studs.

Omar Manning is 6’3”, 200 lbs and a 4-star from Lancaster, TX who could have gone to Alabama, Florida, UCLA or Texas. TCU had to hold off a strong and late push from the Longhorns. Manning is known for his excellent hands and could see playing time sooner than later.

The other stud in this group is Jalen Reagor (Waxahachie, TX). Reagor flipped from Oklahoma to TCU in October and never looked back. He doesn’t have Manning’s size, but at 6′, 190, plays bigger than he is, can catch the ball in traffic, and has blazing speed (4.41 40-yard dash).

The TCU Horned Frogs 2017 recruiting class could use more depth at: linebacker

There is only one linebacker in this year’s class and he’s 3-star, unranked Alex Bush from Norwalk, California. Bush adds some good size (6’2”, 230) to the position, which TCU desperately needs. But, after seeing top-10 JUCO linebacker, and only commit at the position in 2016, Tyree Horton, leave the team last fall, adding just one linebacker this year was surprising.

Granted, TCU often plays in a nickel package with just 2 linebackers and they don’t lose anyone from last year’s two-deep, but you’d still like to see a little more coming in at such a key position.

New Texas head coach Steve Sarkisian continues to dominate the headlines with his staff hires. And perhaps no other hire will make...

TCU Desperately Needs a Spark to Prevent Season from Unraveling

Since Jamie Dixon arrived as head coach in 2016 to revive his alma mater’s basketball program, TCU seasons have become predictable.   In...

Welcome back, West Virginia. The Mountaineers should be back on the floor on Saturday as they’ll face Kansas State in Manhattan, Kansas....

The Big 12 announced two schedule adjustments on Thursday, including rescheduling the Iowa State-Kansas game. That game, between the Cyclones and the...

The West Virginia Mountaineers have lost an offensive weapon in wide receiver Ali Jennings, who announced he would be entering the NCAA...