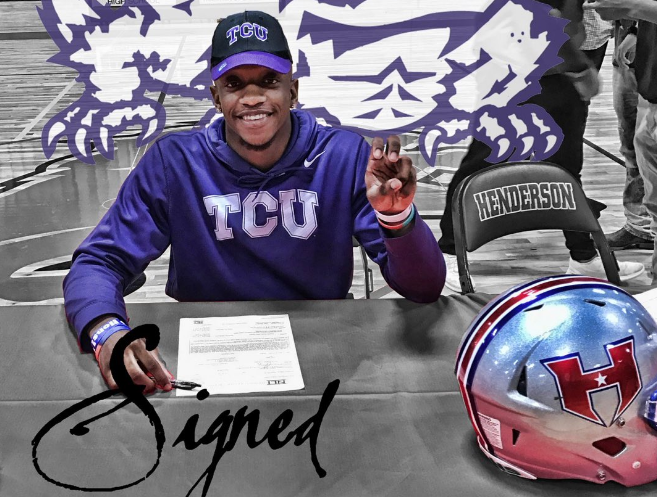 He was Saved that summer at a church camp in Oklahoma.

Before that, Van Zandt had a tough upbringing and would often get down on himself. He told Heartland College Sports, “My parents split up when I was 4 years old. I went back and forth staying with both of them. It wasn’t all that easy getting things I wanted to due bills and all those extra things. It was tough growing up as a kid because naturally kids want their parents together. I used to beat myself up about it, until about the age of 13.”

The day that Van Zandt got Saved hit him very hard, adding, “Never in my life have I cried so much. I realized my life was worth living and what I was going through wasn’t nearly as bad as others that had gotten Saved. It was like an opening. After that I changed and started seeing my life as a test God was putting me through for my future.”

Well, it worked. Van Zandt is as confident and comfortable as he’s ever been as he prepares for the next level of football for the TCU Horned Frogs.

The Henderson, Texas native says he really grew up this past season. He became a leader. He started to realize the younger players were looking up to him. But, it also made Van Zandt realize that he had to be a well-rounded person to succeed, adding, “I started to see other things like I do as if I was on the football field, such as realizing I need to do what I need to do in the classroom. I ended up talking to the younger kids that look up to be about grades.”

As for the season itself, despite some injuries, Henderson reached the third round of the 4A-D1 state tournament, losing to Carthage 33-31. But, it capped off an impressive 11-2 season for the Lions.

But, the most memorable moment of this past season came in Week 1 before a 44-13 win over Atlanta, TX, where Van Zandt says, “We all got in a huddle and all the seniors were in the middle just venting about how this is our last ride. We cried together and played like brothers since that day!”

As he was growing up, motivation for Van Zandt came from his older brother. His brother also played at Henderson, a town of about 14,000 people located 140 miles southeast of Dallas, and now lives in Tyler, Texas.

As for his other interests, Lakendrick Van Zandt will be the first one to tell you he’s a sports nut. That’s it.

His favorite athletes are Adrian Peterson and Kevin Durant. No, he’s not a Thunder fan. He’s a Durant fan, so yep, he roots for the Warriors every night.

As for his love of Peterson, Van Zandt also played running back in high school, and said when he first saw AP run, “it was like, oh my God, the most explosive running back I’ve ever seen. Combine that with his heigh and everything, so I started going off on his steps and tried playing like him.”

Lakendrick Van Zandt will be only playing safety in college and if he has his way, he’ll work his way to the NFL.

He’s certainly chosen the right University, where Gary Patterson has sent several defensive backs to the next level including Derrick Kindred, Jason Verrett, Greg McCoy, Colin Jones and others.

And maybe… if AP stays in the league long enough, Van Zandt will get a chance to tackle his idol.