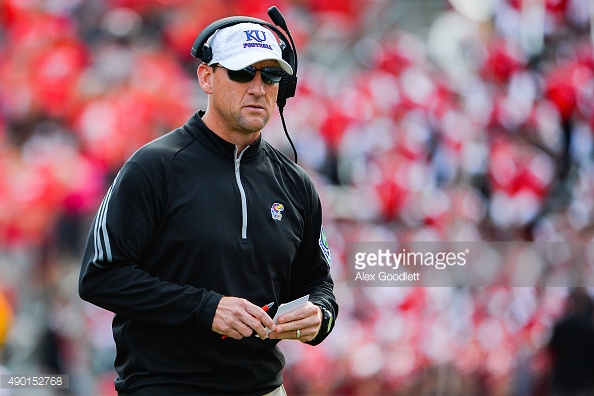 Another National Signing day has come and gone. After thousands of 2017 high school prospects choose their schools and signed their papers, this can only mean one thing: the class of 2018 is now officially on the clock. Take a look at some of the top 2018 classes and there you may find some familiar blue blood programs. You’ll see schools such as Penn State, Florida State, USC and wait……Kanas? I know what you are thinking, “Are we talking about Kansas football?”

Yes, I am just as surprised to be writing this as you are to be reading this. Don’t look now, but Kansas currently has the 7th ranked class in the country for 2018 according to Rivals. They currently sit ahead of 12 SEC Schools (ESPN will have to replace their logo with the crying Jordan face if this somehow sticks) and have the #1 class in the Big 12 after going 2-22 in the past two seasons.

While most folks will give all the credit to head coach David Beaty, there is one man in particular that Jayhawk fans should be rejoicing over. That man is no other than running backs coach, Tony Hull. Hull was a former New Orleans (Warren Easton High School) high school football coach for 9 years before joining Beaty’s staff in 2016. Why is he important you ask? Hull’s Louisiana ties have helped the Jayhawks receive verbal commitments from 6 prospects (3 of them being 4 star rated players), all from the state of Louisiana. These prospects include, Devonta Jason (4 star,#6 WR), Corione Harris (4 star,#8 CB), Ja’Marr Chase (4 star,#31 WR), Aaron Brule (3 star,#30 S), 3 star DT Nelson Jenkins and 3 star RB Anthony Williams.

Yes, there are 51 weeks left until 2018 NSD but before you have your doubts about this class, there is something very important to keep in mind. As of now there is a scheduled meeting on Thursday, Feb. 9th between some of the head football coaches in the city of New Orleans. This is extremely important because this meeting is taking place to consider boycotting LSU, who will be the biggest threat to flip some of these Jayhawk commitments. This boycott is happening because LSU head coach Ed Orgeron dismissed former RB coach Jabbar Juluke within 24 hours after NSD. Now, everyone knows he did this to hold onto as many kids as he could for the 2017 class, but regardless of the meeting on Thursday (Feb. 9th), this is something that will hurt the hometown school in the state for future prospects.

While there is plenty to be excited about in Cajun Country, Jayhawk fans should be keeping a close eye on Carrollton, Texas QB commit, Clayton Tune (Hebron HS). He is the only QB committed in the 2018 class for the Jayhawks and will be a key piece for the future of the program. Clayton told me that he was “Looking forward to being a part of the rebuilding process” and that he “Liked new OC Doug Meecham and his offensive philosophy.” He also referred head coach David Beaty as a “high energy guy” as well raving about the coaching staff’s connection with Texas High School football. When asked about the big commitment party in Lawrence, Kansas this past weekend he told me that it was “planned.”

Well folks, it seems like David Beaty is making strides in Lawrence and he is proving each and every day that he IS the right man for the job.