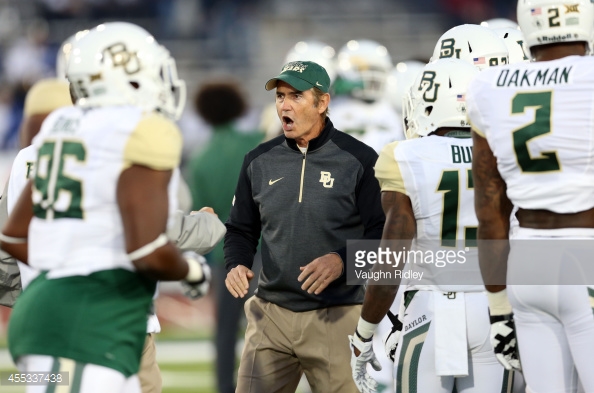 I’m not going to sit here and defend Art Briles and many of the things that have happened around Baylor University in the past year and a half. No chance. There were some terrible things that occurred on Art Briles’ watch. Regardless of how much he knew about each individual case is besides the point. As the head of the program it was his job to know and to properly and appropriately address each situation. He didn’t. And he lost his job over it.

Since then Baylor has wipe the slate clean firing the rest of the staff, along with the President, and athletic director, while being open about improving much of what was wrong with the way the University conducted its business.

From the football standpoint, they made a home run hire in Matt Rhule. Not only did he close strong on the recruiting trail and make solid staff hires with several having close ties to Texas, but he’s a high-character individual who grew up the son of a minister.

But as such is the world of media today, with the news from earlier this week that Baylor had fired strength coach Brandon Washington after his arrest for a prostitution sting, many wanted to pile on Baylor even further.

Here’s the problem: there’s zero connection between the Washington arrest and the Art Briles scandal.

One column went so far as to write this: “Certainly Washington, who worked for Alabama for two years before going to Temple, knows the difference between right and wrong at age 33 years. And yet …I go back to Briles, and the culture he created and enabled.”

This makes no sense. Brandon Washington never worked for, with, or around Art Briles. He never once lived in Waco, Texas. There are zero ties to Washington looking for a hooker and the culture Art Briles let develop at Baylor. Zero… relationship… at… all.

This is in no way a defense of Washington. He deserved to be fired for what he tried to pull off. At the same time, to somehow try and tie his attempt at meeting a prostitute to a leftover culture of Art Briles is really digging for something that just isn’t there.

Also, what Washington did is in no way an indictment on Matt Rhule. I’m sure Rhule wasn’t aware of Washington’s penchant for escort services. Or hell, maybe this was Washington’s first attempt at such an act and he failed so colossally it likely cost him his coaching career.

But Matt Rhule and Baylor did everything they should have done and acted swiftly by firing Washington on the spot.

That’s all this story is about. A strength coach who made a really, really bad decision, was caught, and is going to have to live with it.

The fact that it just so happened in Waco, Texas at Baylor University is an unfortunate and harsh coincidence.