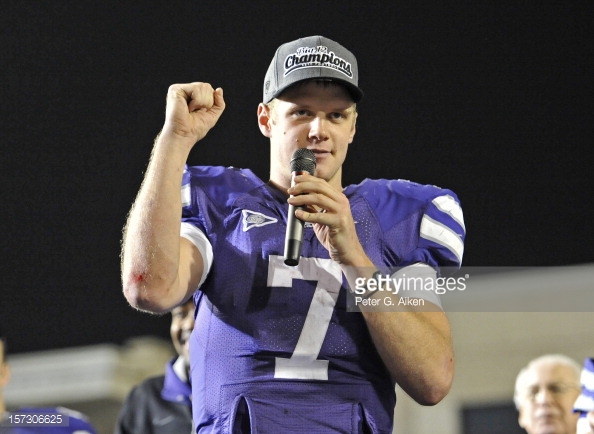 It didn’t take long for Collin Klein to find his way back to Manhattan, Kansas.

According to multiple reports, Klein will be joining Kansas State as an assistant coach and quarterbacks coach.

An official announcement is expected next week. This news comes on the heels of reports that Bill Snyder has spent recent weeks undergoing treatment for a “serious, but very treatable” medical condition.

Last season, Klein was coaching quarterbacks at Northern Iowa. Heartland College Sports actually interviewed him last summer before his season with Northern Iowa kicked off. The Panthers actually beat Iowa State in the season opener but ended up with a 5-6 record in 2016.

Klein will replace current co-offensive coordinator/quarterbacks coach Del Miller, who has decided to retire. Miller just wrapped up his 19th season with the Kansas State Wildcats.

Prior to Northern Iowa, Klein spent two seasons on the staff, starting off as a graduate assistant. He did try to make it as a pro, but only made it to rookie camp with the Texans where hew as not offered a contract. He signed a two-year deal with the CFL in 2014, but was released later that year.
Collin Klein  turned into one of the best quarterback in Kansas State history under Bill Snyder. His junior season the Wildcats won 10 games, which included a 7-0 start for the first time since 1999.
In 2012 the team reached as high as #2 in the country, starting off the season with a 10-0 record, before a tough 52-24 loss in Waco against Baylor in November. In 2012 the Wildcats still went on to finish with an 11-2 record and a Big 12 championship. The Wildcats ended up losing to Oregon 35-17 in the Fiesta Bowl. Klein was also a Heisman Trophy finalist that season and later played in the 2013 East-West Shrine Game.
He finished his college career with 4,724 yards and 30 touchdowns passing, on top of 2,485 yards and 56 touchdowns rushing.
**If you want a chance to win FREE Big 12 gear from your favorite team, be sure to sign up for our weekly newsletter! **