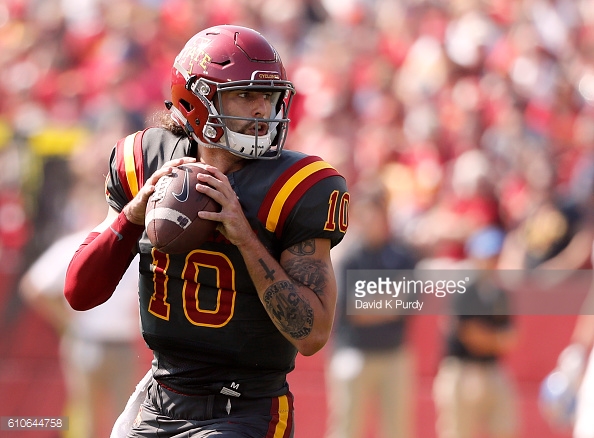 When the calendar flips to 2018, will we be talking about Jacob Park as the Big 12’s best signal caller? I think so.

Sure, the 2017 season is still 202 days away (but who’s counting) from starting. But considering we are already raving about the Kansas Jayhawks 2018 recruiting class, I figured why not really look ahead to 2018 on the field.

This coming fall there’s little debate that the top quarterbacks in the Big 12 will be Oklahoma’s Baker Mayfield and Oklahoma State’s Mason Rudolph. No one in Austin, Ames, Manhattan, or elsewhere can sell me on anyone else.

But, those two will be gone after 2017. The Big 12 will be looking for a new face of its conference, especially at the quarterback position. Maybe it’ll be Shane Buechele, but heck, Texas could very well have Sam Ehlinger at QB by then.

Maybe TCU’s Shawn Robinson becomes the next Trevone Boykin. Sure, maybe Zach Smith will thrive under Matt Rhule, and we know Kliff Kingsbury, assuming he’s employed in 2018 (which is no guarantee), will have a quarterback who can put up big numbers.

But for my money, this time next year we will be saying Jacob Park is the front-runner for the 1st-team Big 12 QB spot.

Park came to Ames with high expectations, but plenty of rust. This past fall was the first time that Park had seen the football field since his senior year of high school in 2013. He redshirted at Georgia in 2014, transferred to Northeast Oklahoma A&M in 2015, but never played football.

In his first few games it showed.

Here’s a breakdown of Park’s first five games in the 2016 season compared to the last five.

The improvement was remarkable for Park. Granted the numbers are slightly skewed as the last few games he became the full-time starter over Joel Lanning. But his play proved that the coaching staff had made the right call. The guys over at Wide Right Natty Light looked back on the end of the season, where you can find more details as to Park’s specific numbers in each game. Plus, as they wisely noted, “If, a big IF, Park is able to add patience and willingness to throw the ball away and hit a check down receiver, he is a player with the skill set of an All-Conference quarterback—or better.”

After nearly 3 years without playing in a real game, Park was finally coming into his own at season’s end and showing the Big 12 what Georgia fans thought they were getting in Athens in 2014 when he came in as a highly-touted recruit.

So, when we look to the 2018 season, the Cyclones will have David Montgomery at running back as a junior. Mike Warren, who we assume won’t leave early, will also be in the backfield for his senior season. Yes, top wide out Allen Lazard will have moved on, but the cupboard will be stacked having Deshaunte Jones, Carson Epps, and Hakeem Butler as either junior or seniors, along with all the other talent Coach Campbell’s staff has brought in.

On the offensive line, five sophomores or freshmen ended the 2016 season on the two-deep.

So, sure there is an entire 2017 season to play. And there is reason to be excited for this fall in Ames. But, the real party might get started this time next year.

When all is said and done, Jacob Park may be the new benchmark for quarterbacks in Ames, Iowa, and the 2018 season could be the special season Iowa State fans have been waiting for.

Tom Petty couldn’t have said it any better when he wrote, “You take it on faith, you take it to the heart. The waiting is the hardest part.”

How Kansas is shaking things up in the world of college … football?
Patrick Mahomes, 2017 NFL Draft prospect: Pros and Cons
To Top